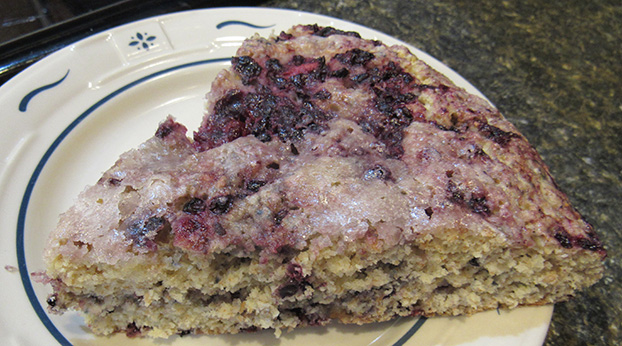 The last of our home grown blackberries were sitting in the refrigerator and I was trying to decide what to do with them. Should we just eat them or should I put them in one final blackberry dish for the season. I only had about a cup of berries remaining so I started sifting through some recipes to see if I could find one that only needed a few berries. I found today’s recipe, which I’d torn from the May/June 2011 issue of Cooking with Paula Deen, and hoped it would live up to my expectations.

A note that accompanied the recipe said if you weren’t serving the scones right away to store them in an airtight container in the refrigerator for up to two days. It also said to warm them in the oven before serving.

Well since this recipe only makes 6 scones I was sure they weren’t going to last more than a day or two. Either Brad and I would eat all of them or we’d share with someone.

After the oven was preheated and the baking sheet was covered with parchment, I got busy putting the scone dough together.

The dry ingredients went into a large bowl and I made a well in the center then combined the wet ingredients and poured them into the well. I stirred the dough a few times, just until it was combined, then tossed in my remaining blackberries and gave the mixture a gentle stir. The recipe said the mixture would be crumbly, and it certainly was. I debated on adding a bit more milk, but decided I better not.

I dumped the crumbly mixture onto the parchment paper lining the baking sheet and pressed the dough into an 8-inch circle. After brushing a little milk over the dough I sprinkled sugar all over it. It didn’t look like much sugar on the top so I did sprinkle on about a tablespoon more than recommended.

The pan went into the oven for 20 minutes and after a little peak inside I saw the scones were light brown so I removed the pan from the oven. After cooling for 5 minutes I slid the parchment paper off the baking sheet onto the cooling rack.

I was so disappointed.

The next day I hoped that heating up a scone would make a big difference and that the second one would be better than the one the night before.

This recipe falls into the Failed It category. The note that accompanied the recipe said these scones would only last a couple of days and that was right. On the second day the four remaining ones ended up in the trash; I wasn’t going to waste my time or the calories eating them. What a shame that I feel like I wasted the last of this season’s blackberries.

Preheat oven to 375 degrees. Line a baking sheet with parchment paper
In a large bowl, whisk together flours, 1/4 cup sugar, baking powder, and salt. Using a pastry blender, cut in butter until mixture is crumbly. Form a well in center of flour mixture.
In a small bowl, whisk together egg, 7 tablespoons milk, and vanilla. Pour egg mixture into well in flour mixture; stir until just combined. Gently stir in blackberries. Mixture will be crumbly.
Gently press dough into an 8-inch round on prepared baking sheet. Brush with remaining 1 tablespoon milk; sprinkle with remaining 2 tablespoons sugar. Bake for 20 to 22 minutes or until lightly browned. Let cool completely on a wire rack. Cut into 6 wedges.