Calipari statue, ‘Coach Cal Court’ to be unveiled this month 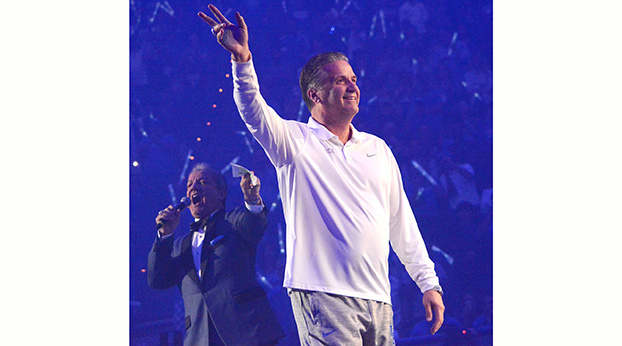 Kentucky coach John Calipari waves to the crown as he is introduced by legendary announcer Bruce Buffer during Big Blue Madness at Rupp Arena prior to the 2019-20 season. (Kentucky Today/Keith Taylor)

A statue of Calipari, along with Marcus Camby, Julius Erving and Jack Leaman will be unveiled Saturday at the Mullins Center in Amherst, Massachusetts.

“It’s kind of neat,” Calipari said. “I tried to get Ellen to come. She says, I see you enough. I’m not looking at you in a statue. So, she’s not going to go, I don’t think.. But to be there with Julius (Erving), with a coach that I respect like I respect Coach Hall, Jack Leaman, and then Marcus Camby, who I’ve told over and over again that what you’ve done for me and my family, I could never repay. And he always follows it, ‘Coach, what you did for me, and I love you.’ I mean, to be there with that is kind of unique and special.”

Calipari led the UMass men’s basketball team to an overall record of 193-71 in his eight seasons as coach from 1988-1996. His .731 career winning percentage remains the best in school history, and he ranks second all-time at UMass in victories.

Calipari led the Minutemen to five straight NCAA Tournament appearances from 1992-1996, after UMass had gone to the NCAAs only once in the first 81 years of the program. His Minutemen made the Atlantic 10’s first and only Final Four appearance during the 1996 season, during which they went 35-2 overall and spent 10 weeks ranked No. 1 in the nation.

Calipari will be honored again this month on Sept. 21 at Clarion, where the court at Tippin Gymnasium will be renamed, “Coach Cal Court.”

Calipari played at Clarion after transferring from UNC Wilmington in 1981. He led the Golden Eagles to their first appearance in the NCAA Division II Tournament that season.

“We are so grateful for the leadership and philanthropy that John and Ellen have shown Clarion University over the years,” said Clarion University President Dr. Dale-Elizabeth Pehrsson. “Their impact on Clarion and our students is immense, and we are proud to be able to recognize this legacy with such a visible tribute.”