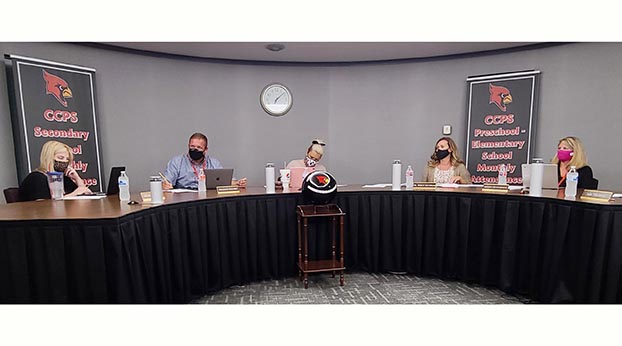 The Clark County School Board voted 4-0 to approve a 1.2 cent tax rate increase on Wednesday. - Photo by Warren Taylor

The Clark County Board of Education voted to adopt a tax rate that will yield a four percent increase in revenue Tuesday, but Superintendent Molly McComas said that the increase will not be a significant one for taxpayers.

“It’s more,” said McComas to the Sun after the special-called meeting adjourned. “For an average $150,000 home that would be like $18 more per family per year.”

The last time the board voted to increase its rate was in 2019.

McComas said that the tax increase serves two purposes. The first is that delaying a tax increase often leads to a rate spike down the line.

“That’s why it is important to do it now because if you let it get behind then it is going to be a much bigger rate later,” McComas said.

She also added that voting to keep the rate the same results in a missed opportunity.

“If you start staying with the same then you are leaving money on the table and you aren’t generating the revenue to keep up with the cost of living,” McComas said.

The second reason for raising the rate is that it will help the district better take care of its human resources: faculty, staff and students.

“We want to do the very best we can by the people that work for us; the people that are from here and live here,” McComas said. “We want our kids to graduate, go to college, and come back and pour into this community.”

The joys of recovery