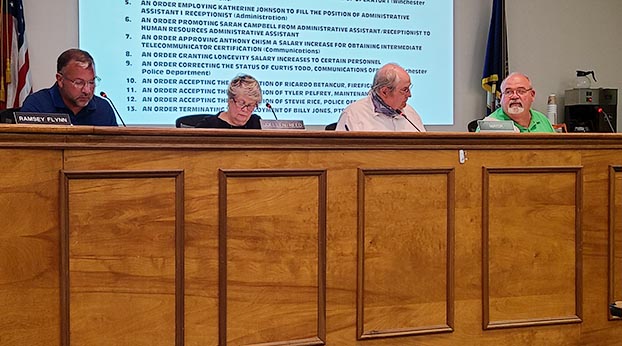 Photo: The Winchester Board of Commissioners discuss an issue during its Tuesday meeting. - Photo by Warren Taylor

he Winchester Board of Commissioners heard the first reading of an ordinance Wednesday that would keep real and property tax rates the same for the coming year.

The city estimates that the rates would allow it to generate over $2 million in tax revenue.

The ordinance will require a second reading before the commission can vote on it at its Sept. 21 meeting. There will be a public hearing on the issue on the same date.

The board voted to approve two agreements that will give the city assistance in planning and distributing recently received federal monies.

The Bluegrass Area Development District, an organization that helps municipal and county governments in the region with planning and development, will help the city determine how much of the $2.4 million it will receive through the American Rescue Plan Act needs to go toward replacing lost revenue.

Mayor Ed Burtner said that once the city determines that amount, that the board will have some decisions to make on how the rest of the money is spent. He said that the decision making will be very deliberate.

The board also approved an agreement between the city and the Kentucky River Hills Development Council. The community action organization will distribute $200,000 the city received from a Community Development Block Grant for household assistance.

The board voted to temporarily close a pair of Winchester streets.

It approved a request from Amanda Dube of Habitat for Humanity of Madison and Clark counties to close Lincoln Street on Oct. 10 from 1 to 3:30 p.m. The event will be a block party to kick off several construction projects in the area.

The board also approved a request from DC Elevator Company in Lexington to close Cleveland Avenue for six hours so that it can update the elevator equipment in the McEldowney Building. The company said it hopes that the work will take place the week of Sept. 13-17.