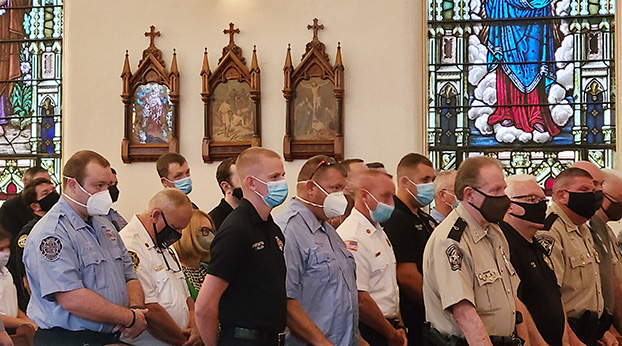 Friday was a sunny and warm September day, much like one of the most tragic days in American history.

Those gathered for the Blue Mass at Saint Joseph Catholic Church were there to remember the fallen and honor those who continue to serve Winchester and Clark County.

“This event, Blue Mass, and Patriot Day (9/11) is intended to honor these first responders we have before us,” said Winchester Mayor Ed Burtner during the service.

The mayor had a very simple message he wanted to share with local first responders.

Father Frank Brawner said in his homily that humanity is always in need of aid.

“We are always in need of help or assistance. We need help from someone to show us the way,” he said.

Brawner said it must be hard to put on a uniform and be judged for even the smallest infraction. He cautioned those gathered to not forget that every one of them is a human who errs and that one’s actions on a bad day is no reason to withhold thanks.

Lt. Eric Hunter of the Clark County Fire Department has served the area for over 36 years, five with the county and 31 with the Winchester Fire Department, and said that he appreciates the community’s support especially due to the tough nature of the profession.

“As first responders we see a lot of ugly things,” Hunter said. “So it’s nice to have the support and see signs of the support.”

The first responders got to see literal signs of support made by students from Saint Agatha Academy when they went next door to have lunch.

The Blue Mass was started by the Winchester Knights of Columbus 20 years ago. Its longtime organizer, Joseph Barlowe, announced during the service that he was stepping away due to health reasons, but he did confirm the tradition will carry on.