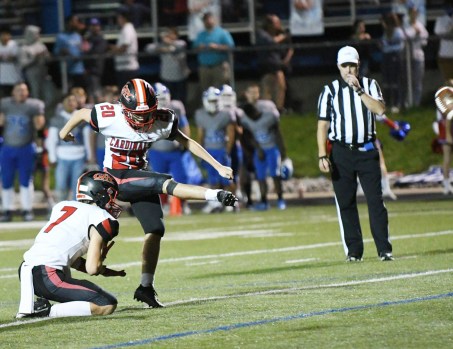 Clay Turley kicks a point-after with Sam Clements holding. Turley was a perfect 2 for 2 on point-after kicks against Montgomery County. - Photo by Smoke Signals Media 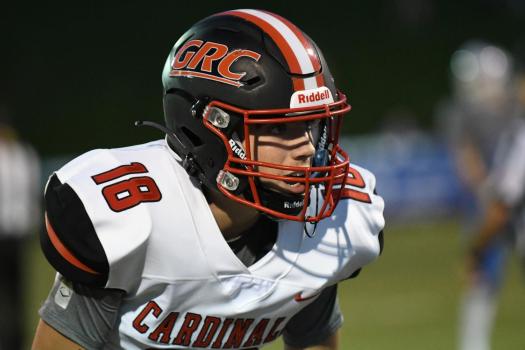 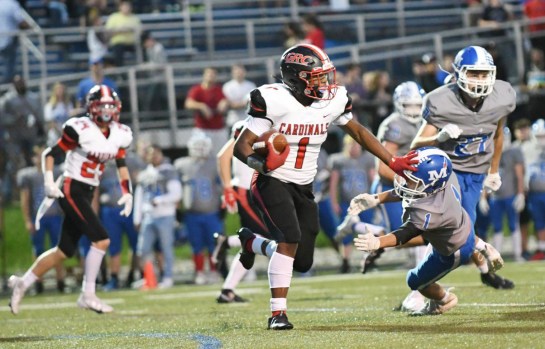 Kalen Washington carries the ball for the Cardinals. He finished the game with 177 rushing yards and a pair of touchdowns. - Photo by Smoke Signals Media 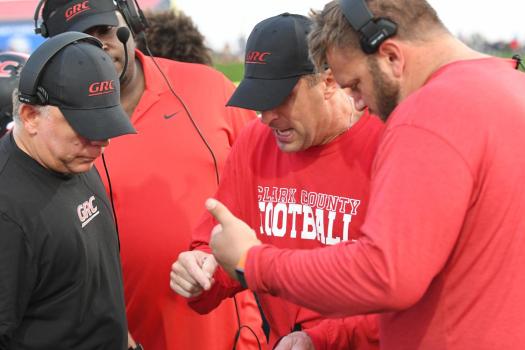 Members of the GRC coaching staff talk things over during the Cardinals' game against Montgomery County Friday night. - Photo by Smoke Signals Media

GRC got off to a much slower start Friday night than Coach Chirico would have liked, in a 21-14 loss at Montgomery County.

The Cards started the game on defense and allowed the Indians’ run game to do whatever they wanted as they came out of the gate firing, topping off run after run, for big gains early.

They were able to march down the field rather quickly to take a 7-0 lead to begin the game.

The Cardinals started off with pretty good field position, but the drive was cut short after a fumble that was recovered by the Indians. That fumble ended up becoming an incredibly important play to the game.

Montgomery’s offense took advantage of the turnover and found the end zone quickly once again.

After one quarter of play, GRC suddenly found themselves down two touchdowns, needing some sort of spark to get back in the game.

After two empty possessions by both teams to end the first quarter, GRC started with the ball to begin the second quarter of play, needing to get some sort of points on the board.

The offense continued to struggle giving the ball back to the Indians, after another empty possession.

Montgomery’s offense was moving the ball through the air pretty well to find themselves threatening again in the Cardinal redzone.

Montgomery kept it on the ground a few plays that set up a massive fourth down play for the Cardinal defense.

The Indians decided to run and the Cards D-line allowed no holes to open up and stuffed the run, to give the ball back to GRC.

The stop seemed to give GRC some momentum for the first time all night. GRC’s running back Kalen Washington busted a 20-plus yard run to get the Cardinals moving quickly.

Quarterback Brady Denham connected on a few passes, and the Cards were quickly into Indian territory. After a few more gains, Washington was able to top the drive off with a touchdown run for six.

With little time left in the half, Montgomery regained possession, but was unable to string passes down the field and decided to run the clock out to take it to half. The Cards found themselves trailing only 14-7 at the break.
GRC started with the ball to begin the second half looking to tie the game up. Washington found holes and was able to break off multiple big runs to move the ball down the field, eventually finding the end zone once again to tie the game.

Montgomery started their first possession of the second half deep into their own territory, after a great kick by Clay Turley that the returner slid on inside his own 10-yard line.

The Indians continued to move further back after false start penalties. The Cardinal defense stepped up big time, forcing a 3rd and 21 inside the Indians’ own 5-yard line.

The defense brought pressure on the Montgomery quarterback but he got the pass off just as he was getting hit.

He had a receiver open at the 50 who caught it in stride, and was able to shake off a defender and run it in for six to take back the lead.

That play seemed to take away all the momentum the Cardinals had.

With about 8 minutes left, the Cardinals had a chance to tie. GRC continued to run it well, picking up some first downs and moving the ball into Indian territory.

The more they ran it though, meant more time off the clock which became a factor. The Cardinals needed to get moving if they wanted to have a chance at overtime.

Forced with a third and long after a false start penalty, Denham connected a pass to Washington who gained about 7.

The game came down to a 4th and medium that one of the Cardinal receivers was unable to hold onto, which gave the Indians the ball with little time to play.

The Indians gained a first down and the Cardinals didn’t have any timeouts remaining, so they were able to run the clock out.

GRC will be off next week and will begin preparing for the Camels of Campbell County at home Sept. 24.