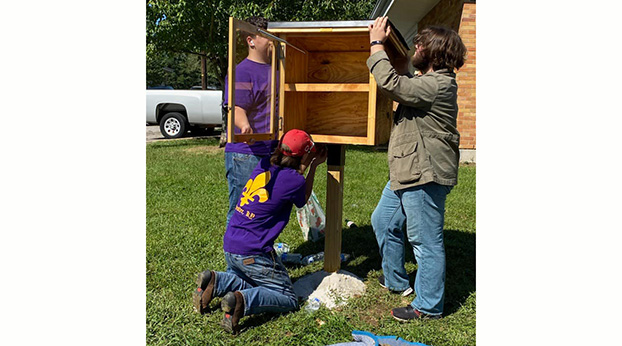 Members of Boy Scout Troop 22 install a blessing box on Stevenson Street in Winchester. The box was the result of a partnership between the scouts and the Winchester/Clark County Unity Commitee. - Photo submitted by Eva Bennett

When want meets need, good things happen. That is how a blessing box and a library box ended up on Stevenson Street in Winchester.

“We wanted to see about doing things in the community on an ongoing basis so that it just wasn’t the King holiday or celebration,” committee member Rick Beach said. “We would begin to do things throughout the year.”

One of the ideas the committee liked was placing a blessing box and a library box somewhere in town, Beach said.

A blessing box is an honor system community pantry where those in need can get food stuff anonymously. A library box operates in much the same manner, the only difference being that when a book is taken it is preferred that it is returned for others to enjoy.

The parents of Boy Scout Troop 22 were already aware of the need for more blessing boxes in the community due to a Facebook group dedicated to the subject, and then one night the topic came up at a meeting.

“We were actually actively discussing it during a committee meeting one night,” said the troop’s advancement chair, Eva Bennett. “Many people in the community were talking about how the one at RDC (Robert D. Campbell Jr. High) was damaged and how someone was trying to repair it. Basically how there are only two boxes but there always seems to be a need for more.”

The members of the troop wanted to help but there was a problem; it was “financially tapped out,” Bennett said. So the solution was clear: offer to do the labor to construct the box.

Bennett said she posted in the Facebook group that the troop was accepting monetary donations to purchase the supplies to build the box.  Donations soon started coming in.

Word of her efforts reached Beach and he contacted Bennett to tell her about the Unity Committee’s idea. After a meeting, the troop and the committee partnered up.

The committee helped the troop acquire the materials it needed to construct the box.

“Somebody had started building a box but never actually followed through and finished it,” Bennett said. “So we got the phone number for that individual and then went and picked up the pieces they had done.”

The troop repurposed the wood, which cut down the construction costs considerably, and with some funds already collected the troop was ready to get to work. Then some more good fortune came for the troop.

“One of the parents in our troop was contacted by a family friend — who asked to be anonymous — and said ‘Any extra expenditures that you guys have, let me know and I will reimburse you for all the fees,’” Bennett said.

Wyatt Bennett, the troop’s assistant senior patrol leader, said building the box was in line with the spirit of the Boy Scouts of America.

“Community service is important to Troop 22 because it helps spread the principles of BSA, not just hiking and camping, but doing good deeds for the community,” he said.

The troop hopes that the box will help address the issue of food insecurity.

“The community has a problem where people in the community could not obtain food, so Troop 22 stood up to help the community by creating this blessing box to provide for those who are not able,” said Wyatt Bennett.

In another serendipitous moment, Beach mentioned the possibility of adding a library box. Bennett’s daughter, Emily, was working on just that for a Girl Scout project. So the troop decided to install one of those as well.

The library box will make book access easier for children in the area.

“We wanted to offer children in different parts of the community who may not have access to the library on a regular basis an opportunity to have books,” Unity Committee member Eva Miller.

Some of the first books were donated by Clark County Schools Family Resource Center but in the future the community is encouraged to donate.

“We are hoping that people will be able to donate gently used books; appropriate books for different age groups,” Miller said.

The scouts and the committee members all wanted to help and now those that really need it have it.