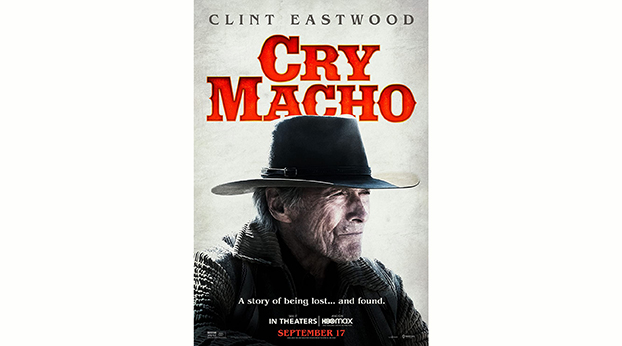 Making your mark and leaving behind a noteworthy legacy is a subject that occupies many a mind especially as we grow older. Have I made my mark? When I die, will I leave any good behind or was I just here occupying space? These are just some of the questions that may cloud the mind from time to time when you deep dive into your psyche while brooding over your legacy. Leaving behind a body of work, valuable life lessons, or just the style in which you live your life, should be one viewed as noble by your loved ones after you pass on. Today’s film is a character study which reinforces the important lesson that only you can dictate the value of what deeds you do in what little time we all have. Let’s saddle up and take a ride into the neo-Western drama, “Cry Macho” (2021).

In 1978, Mike Milo (Clint “High Plains Drifter” Eastwood) a washed up and almost forgotten rodeo star and horse breeder, is hired by his former boss Howard Polk (Dwight “Sling Blade” Yoakam) to travel to rural Mexico to retrieve his son Rafo (Eduardo Minett) from his alcoholic madre (Fernanda “Narcos: Mexico” Urrejola). The unhealthy relationship with his domestic situation has led young Rafo to a life a crime as he participates in illegal cockfights with his rooster, Macho.

Mike and Rafo journey through the tough terrain of Mexico en route to Texas (The stars at night…) face many challenges along their trek. Along the way, the unlikely odd couple learn a lot about themselves as Mike comes to terms with his own life while mentoring the young Rafo what it means to be a good man.

“Cry Macho” was produced and directed by the prolific Eastwood with a screenplay by Nick “Gran Torino” Schenk adapted from the 1975 N. Richard Nash novel of the same title who also penned the original screenplay over forty years ago. “Cry Macho” has been in various stages of being almost being produced since the novel’s release with stars Roy “Jaws” Scheider, Burt “The Professionals” Pierce “Tomorrow Never Dies” Brosnan, Robert “The Night of the Hunter” Mitchum, and Arnold “Commando” Schwarzenegger attached before the deals would fall through hanging out there in Hollywood limbo.

“Cry Macho” is a fitting film for the 91 year old Eastwood who is still sharp, productive, and an efficient filmmaker known for always coming in under budget, on time, and relies on cast and crew to work on landing a scene in one or two takes to keep the production moving and morale high on set. Eastwood helmed this production in the late fall of 2020 amidst the pandemic and already has a release in less than a year. The efficient Eastwood has stated time and time again that he is not retiring and plans to work until he is unable to.

If this is Eastwood’s last film, it is a fitting retrospective of the legendary actor’s body of work since the 1950 up until today. “Cry Macho” is not just a tale of two men learning what it means to be a true man, but more of an awareness of Eastwood’s life, persona, and legacy of material and characters he has portrayed on the silver screen for all to enjoy.

Go ahead, make it a film-tastic Day!