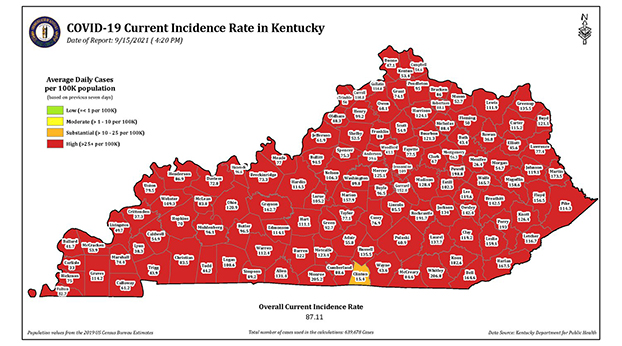 Kentucky saw its fourth-highest daily total of new cases of COVID-19 on Wednesday, and 49 more Kentuckians have lost their lives to the virus, pushing the total number of deaths in the state to more than 8,100.

There were 5,398 new cases reported to state public health officials on Wednesday, bringing the pandemic total to 639,687 since the first positive case was reported on March 6, 2020.

Forty-nine new deaths were also announced on Wednesday, meaning 8,144 people have now been lost in Kentucky. The latest deaths included four people who were in their 30s.

The daily hospital census continues to rise, with 2,493 Kentuckians hospitalized. Of them, 648 are in the ICU and 436 on a ventilator. The positivity rate Wednesday stood at 13.02%.

“We need everybody out there to do their part,” Beshear said, “to get vaccinated and to wear a mask. This is incredibly deadly right now, and we have to blunt this spread.”

A total of 119 of Kentucky’s 120 counties are in the red, meaning they have an average new daily case rate of at least 25 per 100,000 population. The lone exception is Clinton County, which has a 15.4 incidence rate.

The statewide incidence rate is 87.11.