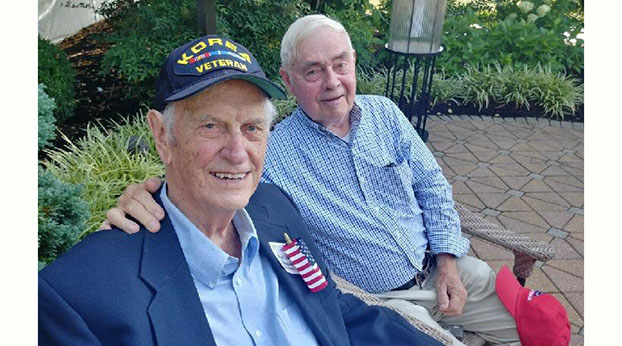 Guy Strong has been inducted into six halls of fame during his 91 years of life, and now he has added a seventh.

The legendary former George Rogers Clark boys’ basketball coach was belatedly inducted into the Kentucky Veterans Hall of Fame as part of the class of 2020 at the Griffin Gate Resort in Lexington.

“I appreciate the honor,” said Strong about his induction, which he was officially honored for in August. “I’m very thankful that I am able to enjoy it.”

Strong received a field artillery officer’s commission as a 2nd lieutenant at Eastern Kentucky University in 1952. For the next year he trained at Fort Polk (Louisiana) and Fort Sill (Oklahoma) before receiving his deployment orders in 1953.

“I had orders for FECOM, which stood for Far East Command,” Strong recalled. “So I went to Korea for a year.”

Strong had good fortune before he even stepped foot on Korean soil.

“They signed a truce two days before my boat docked at Incheon. I was one of the lucky guys,” he said.

Strong was later promoted to 1st lieutenant and became a battery commander of the 12th Field Artillery Battalion, 2nd Army Division. He spent his year-long deployment on the Demilitarized Zone that still separates North and South Korea to this day.

“Being a fourth-generation veteran, I’ve been a patriot all my life,” he said.

His family’s service goes back to the bloodiest conflict to ever take place on American soil.

“My great-grandfather was a captain in the Civil War on the Union side. My father served in the 1st Cavalry during World War I … They took the horses over on the boat with them. Can you believe that?,” Strong said, adding that he also had several family members that served during World War II.

Strong grew up in Irvine and was part of the 1948 Irvine High School basketball team that advanced to the Sweet 16. He played three seasons of basketball at the University of Kentucky from 1949 to 1951, was a member of the Wildcats 1951 NCAA Championship team before transferring to EKU, where he graduated in 1955 after coming back from Korea.

He began coaching at Madison High School in Richmond and later coached at Louisville powerhouse Male High School until 1963 when he was hired at Kentucky Wesleyan College. Strong led the Panthers to the 1966 NCAA Division II championship.

Strong’s next stop was at EKU from 1967 to 1973.  He coached the Colonels to the 1972 Ohio Valley Conference championship  and the school’s first ever bid in the NCAA Tournament before departing for a four-year stint at Oklahoma State University.

Winchester Mayor Ed Burtner nominated Strong for his latest hall of fame and had this to say.

“Guy Strong has led a life of servant leadership. As a 1st Lt. in the U. S. Army Artillery during the Korean War and as educator, school administrator and college and high school coach, Coach Strong has devoted his life to both protecting our country and molding young minds. The honor is well deserved,” Burtner said.

The Kentucky Veterans Hall of Fame was founded in 2014 to honor those that served to protect Kentucky and also to educate the public about their accomplishments.