Kentucky commit Clark ahead of schedule with his knee rehab 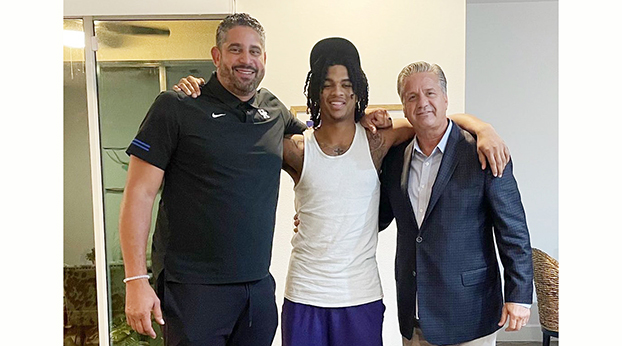 It was not quite three months ago when Kentucky basketball commit Skyy Clark tore the anterior cruciate ligament and meniscus in his left knee.

The 6-3 point guard is a consensus top 15 player in the 2022 recruiting class despite having to cut his summer play short. However, Clark vowed in July his leg would come back stronger than ever and apparently he is on track for that to happen.

“He has been really going hard. Eating right, taking everything serious,” said Kenny Clark, Skyy’s father. “His rehab has been going amazing. It’s unheard of what he’s doing.

“He should be on the court at the 4 1/2 month mark. That is a month and half away and by about January he should be looking to get out there (playing),” Kenny Clark said. “We are not going to rush anything. He’s got to be 100 percent for college.”

Clark has been committed to Kentucky since Oct. 22. He announced in May — before his injury — that he was transferring to Monteverde Academy in Florida and is working to make sure he’s able to help the team this season.

“He has been killing it on the bike in rehab. He’s been in the gym getting shots up. He’s constantly doing something,” Kenny Clark said. “We got him a meal prep person for his meals. His mom has been great with his supplements and taking care of him. We are making sure he is getting everything he needs.

“He loves school here. The camaraderie among the team is amazing. The campus is beautiful. The students have all embraced him.”

Skyy’s younger brother, ZZ, is also at Monteverde but will not play on the national team this year to give him time to develop and gain confidence.

“We want him getting as many minutes as possible and the national team here is loaded. This is the best thing for him,” Kenny Clark said.

Skyy Clark missed most of last season due to COVID concerns and his father, a former NFL player, says his son has parts of his game to work on even while he’s still in rehab.

“Right now he is just working on getting his handle tight and making his jumper more consistent,” Kenny Clark said. “He has been honing in on those things. He wants to make sure his jumper is more consistent and that his floater is as efficient as possible because that floater is so important in today’s game.

“He was doing stuff at the seven-week mark rehab-wise that people at five months normally could not do. His doctor said his progress is like nothing he has ever seen. Even his physical therapist has been blown away but that shows how hard he is working to make sure he’s ready when he gets to Kentucky.”