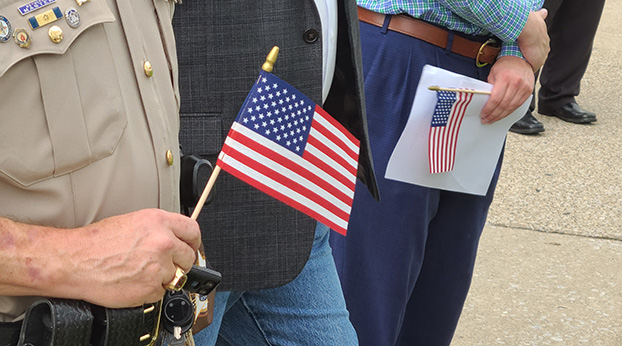 A crowd gathered Monday at the back courtyard of the Clark County Courthouse to commemorate the 234th anniversary of the signing of the U.S. Constitution.

The Constitution Day Program is an annual event hosted by the Hart chapter of the Daughters of the American Revolution as part of its Constitution Week Celebration from Sept. 17-23.

Justice Laurance B. VanMeter of the Kentucky Supreme Court was one of the event’s three featured speakers. He commented on the document’s rare long lifespan.

“The longevity of the Constitution is unusual,” said VanMeter. “An article published in 2009 by the University of Chicago School of Law estimates that most national constitutions only last an average of 17 years.”

Another speaker, Republican State Senator Ralph Alvarado, lamented that Constitution Day is often overshadowed by flashier holidays like the Fourth of July.

“There aren’t any national concerts or celebrations on the 17th, no major parades or no long weekends at the beach,” he said.

The senator said that the “Constitution is probably of greater significance than the Declaration of Independence itself,” and that it is essential to teach future generations about it.

“The founders left the document to posterity, charging their descendants, all of us, with protecting it. The Constitution, though imperfect, has none the less has held this republic together for over 234 years, and if we fail to teach our children about the principles enshrined in the Constitution and why they are necessary, it is unlikely this country will last another 234 years,” Alvarado said.

The first-term Republican compared the document to a hero’s uniform.

“As I think about all the superheroes that we’ve seen through television and comic books, all of them wore a special costume; they wore a cape,” Dotson said.”America’s costume, and what makes America great and what separates it from everyone else, is that it’s wrapped in the Constitution.

The program began with the presentation of colors from the George Rogers Clark High School R.O.T.C. Color Guard. It was followed by the Pledge of Allegiance and a “Star-Spangled Banner” performance by James Cowan.

Winchester Mayor Ed Burtner followed with an overview of the Bill of Rights. He also read the official proclamation recognizing the week-long celebration.