Calipari will have options at point guard 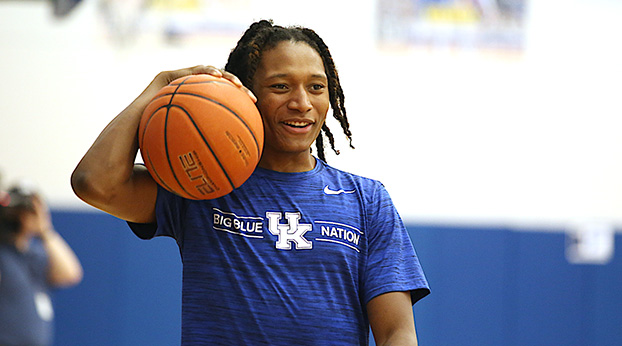 Ty Ty Washington will be one of John Calipari’s options at point guard this season.

Kentucky coach John Calipari is going to have multiple options at point guard this season, a luxury he did not have last season. But would he prefer to see one player emerge as the clear No. 1 point guard or can he be comfortable rotating players?

Georgia transfer Sahvir Wheeler has been an assists machine but not a prolific shotmaker.

“Normally, you put that guy as an interceptor. You need someone in the front line that’s going to occupy.”

Freshman TyTy Washington was a late addition after Nolan Hickman Jr. asked out of his commitment to UK. Washington has made a big impression in preseason workouts.

“TyTy is better than I thought. A demeanor, plays the game as it comes, skilled — floaters, jump shots, making passes. Decision-making not quite there,” Calipari said.

Calipari said the two can play together and he’s been known to play two point guards together or even three like he did with Immanuel Quickley, Tyrese Maxey and Ashton Hagans.

“You’ve got Davion (Mintz) who can, as we learned late in the season, he can play the position more as a scoring kind of guard than a creating point guard for his team, but he still can play it. So, we’ve got three, and I’m really excited about all three,” Calipari said.

The UK coach said Davidson transfer Kellan Grady, a 3-point shooter who has scored over 2,000 points in college, can also play point guard if needed.

“So, we have options, and I’m really excited,” Calipari said. “Seeing how they’re playing, I think it’s, again, brought guys together because it’s really about playing for each other, and I think that’s helped us too.”