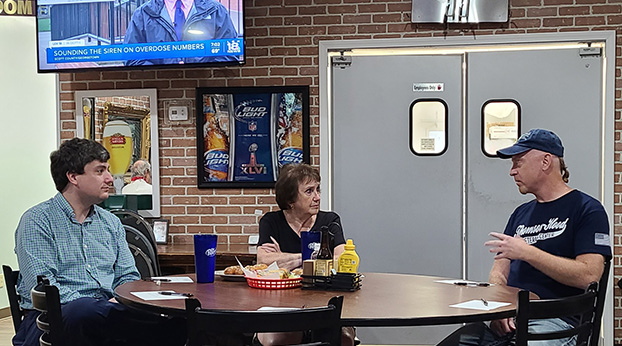 It’s why the organization she founded, Lady Veterans Together, invited them to Woody’s Sports Bar and Grill on Monday for a meetup.

Support was something that many veterans at the meetup said they or someone they knew needed.

“We have somebody here that can help whatever you have a need for, so please just let us help you,” Abbot said.

Several veterans opened up about the difficulties they faced after leaving the military such as homelessness or not getting the benefits owned to them.

Others spoke about watching friends and loved ones struggle with Post-Traumatic Stress Disorder or other severe mental illnesses brought on by their military service.

Several did not receive proper support or care, including the good friend of one Marine in attendance. The Marine said his friend lost his family and later committed suicide.

Rogers said events like the meetup at Woody’s are needed to remind veterans that their service is not forgotten.

Rogers served in the Navy for eight years as a master at arms and then a career counselor. He said that many veterans, including himself, struggle with adapting to civilian life after being used to “following an expected path” for so many years. Something as simple as a resume can be vexing for them.

Today Rogers works for an organization that helps veterans write resumes and prepares them for job interviews.

The meetup brought veterans together as Abbot wanted, and more importantly, it was the first step in forming mutually beneficial relationships.