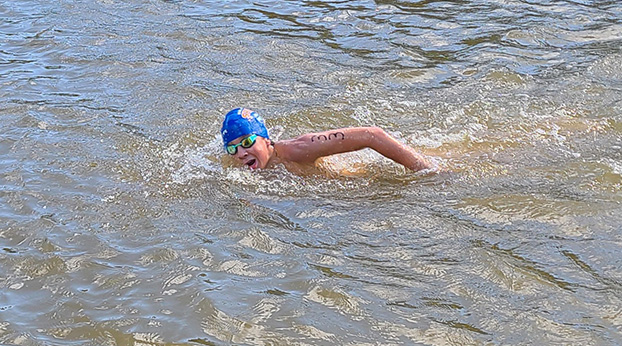 A member of the Swimchester Sailfish swims down the home stretch during Saturday's Kentucky Open Water Championships. - Photo by Waren Taylor

Lifeguards, seen in kayaks, and safety officials in boats were present to keep the swimmers safe. -Photo by Warren Taylor 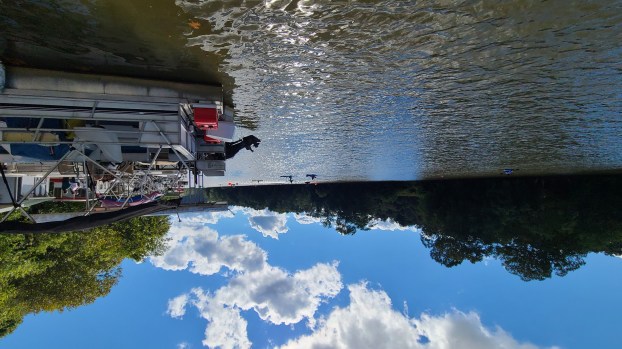 The Kentucky River was cold according to the swimmers, but the meet took place on a lovely day. - Photo by Warren Taylor

The Kentucky Open Water Swimming Championships had not happened since 2016, but the event returned Saturday in the waters of the Kentucky River in Clark County.

The five-year hiatus disconnected race swimming in the Commonwealth from its ancient roots.

“Truly, it’s the origin of competitive swimming,” said Kevin Ryan, the head coach of the local swim team, the Swimchester Sailfish, and the event’s organizer. “People [did it], hundreds of years ago, swimming in lakes, rivers and oceans.”

Also known as marathon swimming, it has been an Olympic-sanctioned sport since 2008. Instead of swimming in lanes, competitors follow a course outlined by buoys.

17-year-old twins Samantha and Sarah Coffey are members of the Sailfish and were two of the 45 athletes that competed.

They have been swimming for ten years. The two have competed in open water races in Tennessee and Florida and said the departure from regular racing is intimidating at first.

“It’s hard at first because you don’t really know how it is going to go because you’ve never done it,” said Samantha Coffey.

Sarah Coffey said that once a swimmer gets used to the situation, they find “it is manageable.”

Nothing prepared the twins for the shock of the Kentucky River’s chilly waters.

“I’ve never swam in this cold of water before, so I was starstruck at first,” Sarah Coffey said.

The sisters agreed that the best way to regain focus was to remember they “were doing it for the team.”

With the meet taking place in an uncontrollable body of water, there are several safety precautions to follow.

“Well, you have lifeguards and various points throughout the race,” Kentucky Swim official Lisa Anne Peacock explained about the safety regulations. “You’ve got boats, and then all of the buoys are marked; everything is clearly marked.”

Peacock said that competitors are marked with a number on different points of their bodies, have tickets they must give to an official before and retrieve after the race, and listen to a briefing before entering the water.

According to the 2021 USA Swimming Rulebook, an open water swimming event can occur in any body of water with a nominal current and a depth in parts of the waterway of at least 4.5 feet. The water temperature can be no less than 60.8 degrees, and the water quality must pass local quality standards.

The most challenging precaution to follow was finding boats and lifeguards.

Ryan said it was “quite an undertaking” to put together. Still, he found a sufficient number of watercraft thanks to the Winchester and Clark County Fire departments, and the Kentucky Department of Fish and Wildlife.

Finding lifeguards was easier since Ryan had access to qualified guards through his position as the aquatic director for Clark County Parks and Recreation. The lifeguards patrolled the course in kayaks while the competition took place.

The United States national governing body for swimming is currently in the middle of a push to build the sport up.

“USA Swimming is really making an effort to grow it at the grassroots level and the state level,” Ryan said. He added there “isn’t a culture of open water swimming in Kentucky.

Some of the issues that have kept the sport from finding firm footing in Kentucky are a lack of interest from athletes and the sheer undertaking of hosting a meet.

Ryan said he wants to see the sport grow statewide and described the meet as a passion project.

“It’s a lot of fun,” he said about the sport, comparing it to cross country track. “It’s a little bit aggressive, and there is some physical contact. You are dealing with less than ideal conditions; there are currents and wildlife … I like that part of it. Where when you dive into a pool, every pool is identical and repeatable.”

An unintended consequence of the meet is rehabilitating the reputation of the Kentucky River.

“The river gets a bad wrap,” Ryan said. “If you talk to anybody on the street in Winchester for a while, they turn their nose up at it and are grossed out.”

Ryan said that the river’s water quality tests regularly come back with positive results and only rises after “a day or two of heavy rain.”

He said that despite its ordinarily murky appearance, the river’s cleanliness and gentle currents made it an ideal body of water to host the meet.

The owner of Old Habits Bar and Grill, Jason Harris, had never even heard of open water swimming until Ryan approached him about using the bar’s dock to stage the races.

He was impressed by what he saw on Saturday, though.

“It’s pretty neat,” Harris said. “It’s wild everything going on. The organizers have got a lot of responsibility.”

Hopefully, the bar and the river won’t have to wait five more years to host the unique sporting contest again.