Mintz will be in sixth season at UK this year 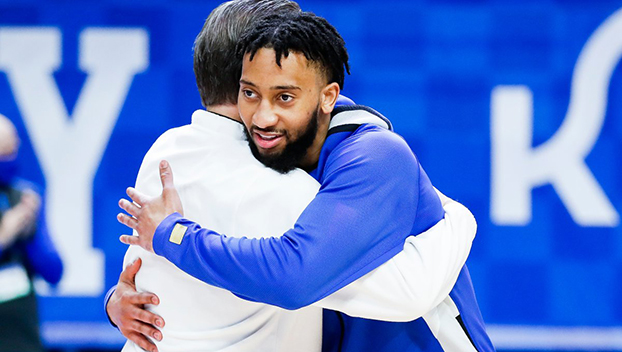 Davion Mintz will get to hug coach John Calipari on senior night again this season after returning to UK for a sixth college season.

Davion Mintz says last season was an “extremely crazy time” not only for Kentucky basketball but almost every team. That’s a big reason Mintz decided to stay in college for a sixth season and come back to UK for a second senior year.

“Having a fan base like UK can change a lot of things. Having that support behind you for one more year was a huge part in my decision (to return) but so was proving to NBA scouts what I can do. I understand I am a late bloomer,” Mintz said. “I want to prove I can go out as a winner.”

He thinks his role on this year’s team will be more unique than last season when he primarily played shooting guard before running the point the last two games.

“This kind of reminds me of my freshman season (at Creighton) when we had a lot of upperclassmen,” Mintz said. “Not to this degree (like at UK this season). I think that experience factor is going to be huge and pay off for this team.

“It is extremely different from last year when we had a lot of new guys come in. These guys (transfers) are also new but these new guys have seen different things and played at a high level. It is going to be fun and extremely competitive. It is a good culture to be part of as we try to win a lot of games.”

Mintz said he has worked a lot on finishing at the rim better as well as drawing more fouls and making more free throws.

“This summer I worked on all aspects of my game from footwork to getting my jump shot off faster. Overall, just become a better all-around player,” he said.