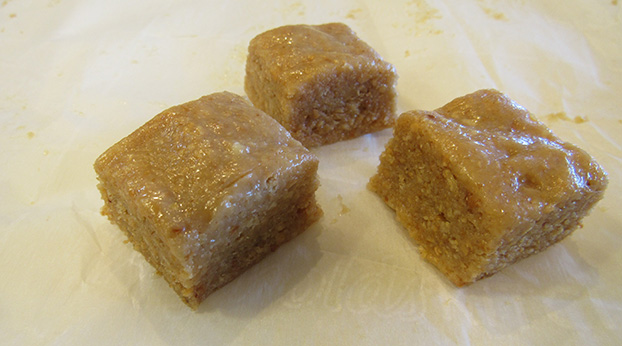 Recipes for sweets always catch my eye and when I spotted this recipe in the February/March 2021 issue of Taste of Home magazine I could not resist tearing it out of the publication and placing it in my stack of candy recipes to make someday.  Typically making candy involves using a candy thermometer and the weather has to be perfect for it to turn out right that’s why I was really interested in this recipe – because it involved neither.

One day when it was raining and I could not be outside I decided I’d bake or make something.  When I spotted this recipe it had so few ingredients and sounded so easy, I could not resist giving it a try.  Besides that, I had all of the ingredients in the pantry.

The note that accompanied this recipe stated that it’s a popular treat in Brazil and that after I tried it, I’d love it.  That was per Francine Lizotte of Surrey, British Columbia, who had submitted the recipe to Taste of Home.  Well after that recommendation, why wouldn’t I give it a try.

I lined a square baking dish with parchment and then put the graham crackers and peanuts in my Ninja blender. I hit the pulse button a few times and then added the sugar.  I hit pulse a few more times and then poured in the sweetened condensed milk, vanilla and salt.  A few more pulses and the candy as mixed.

The mixture was like dough so I couldn’t pour it out into my baking dish, I had to scoop it out.  I pressed the mixture into the pan, covered it and put it in the refrigerator to firm up overnight.

The next day I removed the pan from the refrigerator and lifted the candy from the pan using the parchment paper that was hanging over the edge of the pan.  I pulled the parchment from the bottom of the candy, placed it on a cutting board and grabbed a large knife to cut into it.

The information that accompanied the recipe said to cut 81 pieces from the mixture so I cut the pieces fairly small.  The candy didn’t stick to the knife, but when I placed each piece in a storage container I made sure the pieces weren’t touching just incase they might stick together.

After cutting all of the candy squares I finally gave this a try.  Even though the stuff was sweet and peanutty, I didn’t consider it candy.  It satisfied my sweet tooth, and I Nailed this recipe, but I’m not really in a hurry to make it again.  I can’t say that I would never make this again because if I find myself bored on a rainy day, wanting something sweet, and have the ingredients, I just might make it again.

I didn’t count the number of pieces I got out of this Pacoca, but there was plenty to share.  I took some to my brother and mom – Mom said it was OK and Alan, my brother, said it was too sweet for him.  Brad thought it was a bit too sweet and it reminded him of fudge.  On the other hand, my neighbor Rachel, thought it tasted pretty good.

I’ll add this recipe to my self-made cook book even though it isn’t one of my favorites.

Press dough into the prepared pan.  Refrigerate, covered, at least 4 hours or overnight.  Lifting with parchment, remove from the pan.  Cut into 1-inch squares.  Store in an airtight container.

Note:  For a twist, drizzle melted chocolate on top after pressing the mixture into the baking dish.