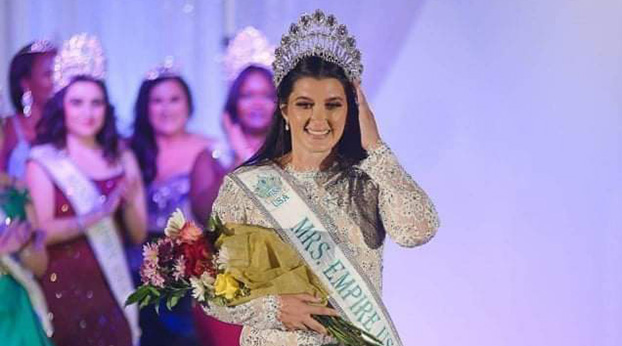 Tori Ansell after she was crowned Mrs. Empire USA - Photo by Oscar Toscano

A queen walks among Clark Countians.

Winchester resident Tori Ansell recently returned from Las Vegas after signing the contract that officially made her the reigning Mrs. Empire USA.

The Ashland native moved to the area four years ago when she married her husband, John, and was a full-time mom to their five children: Tennessee, Mia, Mackey, Johanna, and John.

She also competed in different pageants.

“I used to do pageants years ago, and I kind of gave it up because, well, some pageants aren’t so honest,” Ansell said.

Giving up the pageant circuit didn’t suit Ansell. So she decided to give it one last try.

“I looked around and researched, and looked through the different ones. This one was the closest I could find to the Miss America Pageant,” Ansell said.

The Miss Empire USA family of pageants started in 2010 as a state competition in California and expanded to the national level in 2014. It offers contests for girls and women of all ages–and relationship statuses.

According to its website, the organization aims to “build self-esteem awareness, promote community service, and provide educational opportunities through scholarships.”

Ansell said what drew her to the pageant was its emphasis on building women up.

“This system is a sisterhood,” she explained. “Yes, we competed against each other … It’s more like a friendship than competitors.”

Ansell captured the crown of Mrs. Kentucky Empire USA in July 2020 while she was seven months pregnant with her youngest son and said the competition was more stressful than usual due to that.

“It was exhausting,” she said with a laugh. “I’ve done many, many pageants, and you wouldn’t believe how the weight of a baby belly makes it harder [to walk] in heels.”

Pregnancy hormones had a hand in making her appreciate the win that much more.

“Winning that state title … I probably cried way more than I normally would have,” Ansell said.

The state title usually requires many hours of charity work, but the COVID-19 pandemic complicated that.

“At that time, everything was pretty much shut down, so there really wasn’t a whole lot I could do,” Ansell said. So she mainly judged other pageants and assisted at car shows.

Ansell traveled to California for nationals this July.

The trip out west included a significant milestone for her, a first trip on an airplane, which made her a little apprehensive. So she brought some backup.

During her week-long experience, Ansell got to see the sights in Hollywood and ended up in a rap video being filmed at the famed Santa Monic Pier.

“Me being silly, I told them I should have photo-bombed them, and the next thing I know, I’m in it,” she said.

Preparing for a pageant means late nights and a lot of time learning the small details that make it go off without a hitch.

Still, Ansell said it was a fantastic experience and that she made new friends from the pageant and people she met on the street.

Her crowning moment was a bit of a blank at first, and then came the tears of happiness.

“I remember crying. I was in shock,” Ansell said. “I remember running up to the judges and saying ‘Thank you.’”

After hugging the first runner up, Ansell took a “surreal” walk down the runway and hoped her tears “didn’t mess up” her makeup.

Then her thoughts turned to her family.

“I remember I wanted to call my kids and my husband and say ‘Mommy did it!”.

Ansell loves the Miss Empire USA organization because it gives her a year to focus on her philanthropy of choice, something the pandemic prevented her from doing last year.

“My platform is handicapped accessibility,” she said.

The root of Ansell’s passion came from watching her mother struggle on vacation after she temporarily became a wheelchair user after a motorcycle accident.

“When took her to the Bahamas. So we drove to Florida, and you would be surprised at many places, even though they say they are handicapped accessible, you cannot get a wheelchair in there,” Ansell said.

She also has personal experience due to a recurring health issue.

“I have been paralyzed three times in the last six years from the waist down,” Ansell said. “Being in a wheelchair by yourself, you cannot get into some of these places.”

During the next year, she wants to “meet as many people as possible.” Ansell will take part in numerous national photo shoots and go on a cruise with the organization’s other queens.

When her reign ends, she won’t be far from the pageant world because she will become the Miss Empire USA’s state director for Kentucky.

More importantly, it gives Ansell a chance to be a role model for her kids.

“It means I can show them that no matter what age you are, you can still achieve your goals.”