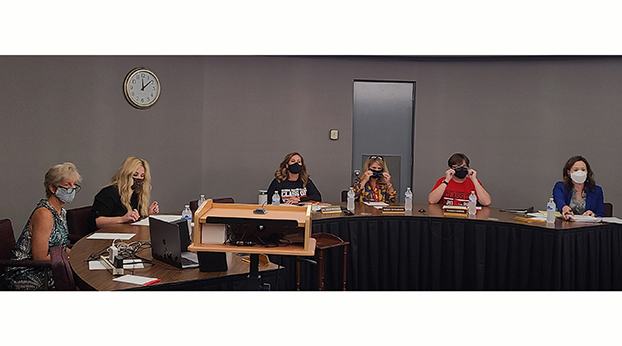 The Clark County Public Schools Board of Education made a controversial move on Friday to proceed with the hiring of a new board attorney. - Photo by Warren Taylor

The Clark County Public Schools Board of Education voted to issue a 30-day termination notice to Winchester law firm Grant, Rose & Pumphrey during a special-called meeting on Friday.

The board’s 3-0 decision to terminate its business contract with the firm for legal services and to approve one with Mount Sterling firm White, Peck and, Carrington was met with controversy.

During the public comment portion of the meeting Tara Brinegar questioned why the meeting was held at noon.

“Is there a particular reason why this meeting was scheduled at this time and not a later date when more people from the public could attend?” Brinegar questioned. She added, “A lot of people are at work right now.”

Board member Megan Hendricks answered that the meeting was “a housekeeping matter.”

“We have had meetings in the past where huge purchases were being made in the middle of the day to approve those purchases. It worked for the majority of the board and we’ve decided to proceed.”

The board’s last noon meeting was April 23 to approve the purchase of a field covering for the football stadium at George Rogers Clark High School.

“Not to be overly negative, but what works for the board doesn’t always work for your constituents,” Brinegar replied.

Nena Honaker, a GRC graduate, said she was concerned about the board’s lack of reasoning for why it needed new legal counsel.

“You have not clearly communicated to the taxpayers the reasoning for wanting a new attorney to represent this board. What did Mr. [Brian] Thomas do? Was it something unethical or something illegal?” Honaker questioned.

Thomas has represented the board on behalf of Grant, Rose, & Pumphrey, and in February reported the allegations that board member Sherry Richardson’s family overhead door business indirectly benefited from a district project to the Kentucky Attorney General’s Office, which prompted an ongoing investigation.

Hendricks said that in her opinion the meeting “was not the time discuss that” because there are a lot of moving parts to the issue.

“I can say that the majority of us did not feel comfortable and we chose to proceed from that. Take from it what you will. That’s the approach at this time,” she explained.

Honaker asked Richardson and Brenda Considine if they felt the same way. Both replied that they did.

“Maybe not for the reasons that you suspect,” Richardson said.

Honaker said from her position as a taxpayer and a parent that Considine, Hendricks, and Richardson were upset because Thomas did his job and filed an ethics complaint.

“You three have clearly collaborated against Mr. Thomas and against the community of Clark County,” she said.

Two board members, Ashley Ritchie and Bill Taulbee, were not in attendance and had previously recused themselves at the last board meeting from the interview process and the vote about the board attorney position.

Taulbee said in a prior interview with the Sun that he was not consulted about the meeting’s time and his messages to attempt to reschedule due to a prior work commitment went unreturned by other board members and Superintendent Molly McComas.

Thomas said in a phone conversation that he was not consulted about the day and time of the meeting either, and was out of town for business when it occurred.

“I think that we provided the best services for the best price for the taxpayers so the money would not be going into a lawyer’s pocket but rather be used for educational opportunities for our children,” he said about the matter, and added that he expects to receive the termination letter soon.

The bid that Grant, Rose & Pumphrey submitted would have charged the board $80 an hour for services, well below the $200 an hour that White, Peck, and Carrington will charge it.

Considine, Hendricks, and Richardson voted to terminate the services of Thomas’ firm and to approve the motion to execute the contract with the Mount Sterling firm.

Both Considine and Hendricks declined to comment about the proceedings after the meeting.