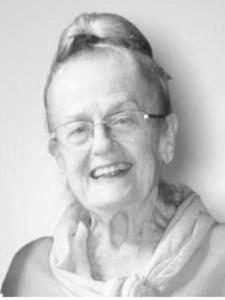 Nansara Jo Penick Baker passed away and entered the Kingdom of Heaven on Sunday, September 26, 2021, at the age of 87. Nansara was born on October 5, 1933 in Jackson, Tennessee. Her parents were Albert K. Penick and Alice Pauline Mount Penick. They moved to Winchester, Kentucky when Nan was five years old. There she attended Saint Agatha Academy and graduated from Clark County High School in 1951. She went on to graduate magna cum laude from Georgetown College where she was a member of Sigma Kappa sorority.
Throughout her life Nan wore many hats—mother, homemaker, sister, teacher, friend, and confidant to name a few—but in each of these roles she brought a sweetness and spunk that could bring a smile to even the most irascible face. Anyone lucky enough to meet Nan gained a friend for life, and felt the joy of being truly known, listened to, and cared for. Nan enjoyed bowling and traveling, and was a very active and beloved member of Russel Cave Road Baptist Church for many years. She deeply loved her church family and the Lord. In addition to her sweet and thoughtful nature, she was whip smart, incredibly protective of her family, and undeniably funny. Nan found great joy in being a homemaker, reading, and flower gardening, but most of all she loved spending time with her children and grandchildren.
Nan was preceded in death by her parents, her husband Donald Clinton Baker, her sister Polly Penick Edwards (Gene), her brother Jacob Penick, one son Bobby Guy McClain Jr., and one daughter Patricia Ann McClain.
Nan is survived by her daughter, Darla Kay McClain-Warren (Ted), her son Mitchell Thomas McClain, her grandchildren, Robert McClain, Thomas McClain, Nick McClain, Hannah Marie Warren, Sara Grace Warren, and two great grandchildren, Alexander Houston McClain and Noah James McClain.
Funeral arrangements are as follows: Visitation will be at Kerr Brothers Funeral Home, 3421 Harrodsburg Road, Lexington, Kentucky on Sunday, October 3, 2021 from 5:00-8:00 PM. The funeral service will be at Russell Cave Road Baptist Church at 3179 Russell Cave Road in Lexington, Kentucky on Monday, October 4, 2021. Visitation will be from 10:00-11:00 AM followed by the funeral service at 11:00 AM. Interment will be at Lexington Cemetery.