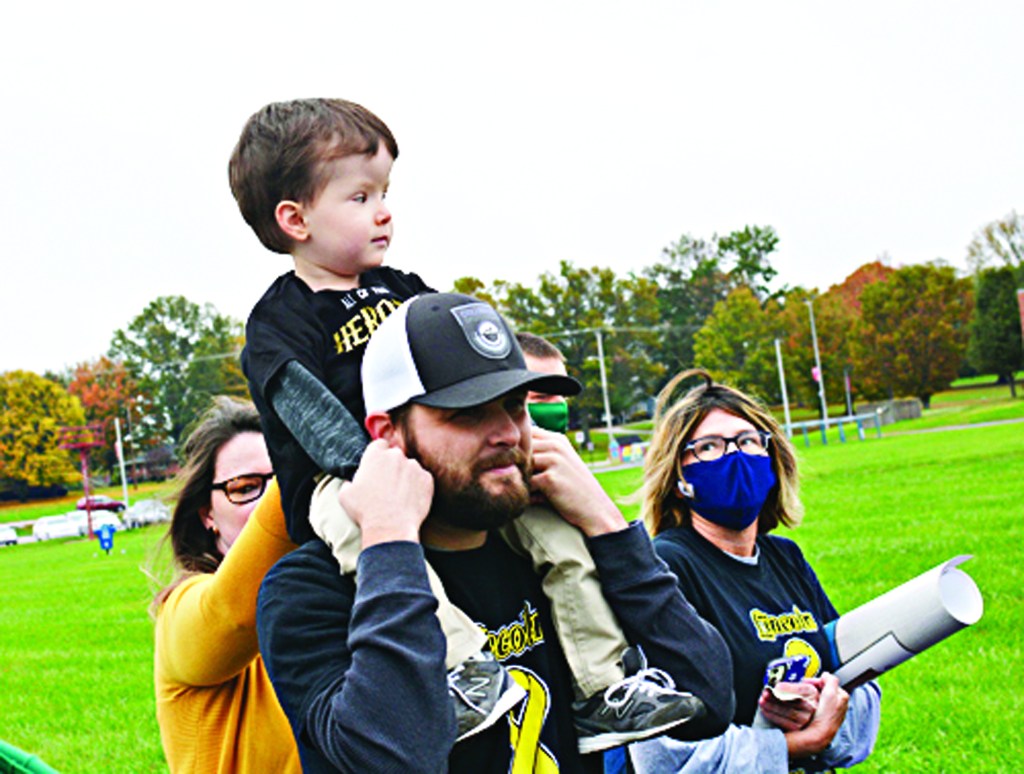 Lincoln Moore, 4, who has spina bifida, started out using his walker but hitched a ride on his dad Steven's shoulders while his mom, Amie Miller Moore, walked alongside during last year's Walk N Roll. - File photo.

Four-year-old Lincoln Moore loves to ride on his toy tractor and play with his puppy, Rocky. He can also walk with assistance and has taken a few independent steps; doctors said he never would.

Clark Countians are invited to come and walk with Lincoln on Saturday from 10 a.m. to noon at the George Rogers High School track for the second annual Walk N Roll for Spina Bifida.

Spina bifida involves an incomplete closing of the spine and the membranes surrounding it during early pregnancy. The condition affects over 1,400 children born each year in the United States.

In its most severe form, it can cause developmental delays, impact motor skills, and affect the ability to control bodily functions.

Lincoln’s mother, Amie Moore, had never heard of the disease until she was 20 weeks pregnant with him.

“We found out about it through an ultrasound,” Moore said. “When I was 24 weeks pregnant, we were referred to Cincinnati Children’s Hospital. I underwent fetal surgery while I was pregnant with him. I was put on bed rest and stayed at the Ronald McDonald House for almost four months between bed rest and having him.”

After he was born, Lincoln spent 40 days in the hospital’s neonatal intensive care unit. The doctors told his parents he would never learn to walk, crawl or talk.

“To see him walk, since the doctors said he would never be able to, that’s just a miracle in itself,” Moore said.

Lincoln does suffer from developmental delays, epilepsy and hydrocephalus–a condition where fluid builds up on the brain.

Still, Moore says that “it is amazing” what her son can do despite that.

The Spina Bifida Association of Kentucky annually hosts Walk N Rolls in Lexington, Louisville, and Paducah to raise funds and awareness about the disease.

When the Moores found out about them, they knew they wanted to be a part of it.

“When Lincoln was born, my husband (Steven) and I were unable to be at the walk … Because Lincoln was in the NICU,” Moore said. “So my family and my husband’s family, they participated in the walk for us.”

The family made it a point to go to the event in Lexington from there on out.

Due to the COVID-19 pandemic, the events moved online last year, but the Moores wanted to do something locally.

So they organized a Walk N Roll at Robert D. Campbell Junior High School’s track, which raised over $1,000 and drew 40 participants.

“We had a decent turnout given the pandemic,” Moore said. “So we decided to do it again this year.”

The event is free of charge, but donations, which will go to the Spina Bifida Association of Kentucky, are encouraged.

Moore said the walk will begin at 10:30 a.m. Her family will only take one lap around the track, but others may walk as many as they wish.

Attendees will be able to bid on items donated by 37 local individuals, churches and businesses.

“We are very appreciative of them donating baskets and gift cards, and also giving door prizes,” Moore said.

The event has a Facebook page, Winchester Walk N Roll for Spina Bifida. Anyone wishing to donate may do so at the event with cash or by writing a check to the Kentucky Spina Bifida Association.