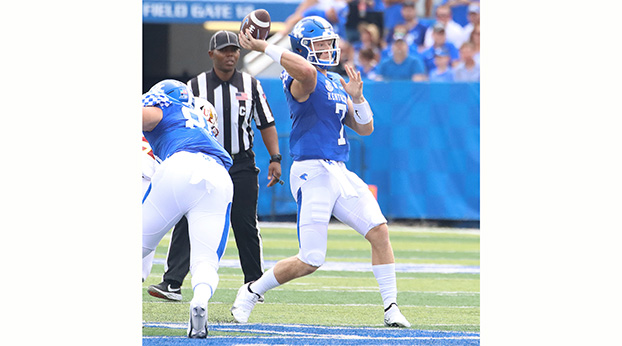 When Will Levis was named starting quarterback at Kentucky, the coaching staff insisted the Penn State transfer, who played catch up from his first snap in fall camp, gave the Wildcats the best chance to win.

A late arrival on campus from State College, it turns out he was ahead of the game before camp began and the coaching staff knew they had a signal-caller capable of calling the right shots and making the right decisions.

Through six games, Levis is undefeated (6-0) as Kentucky’s starting quarterback and has the Wildcats off to their best start since 1950, a span of 71 years, the team’s fan base has waited for a similar season the late Paul “Bear” Bryant enjoyed in the fifth of his nine seasons in Lexington.

In his debut, Levis threw for 367 yards and four touchdowns in an expected easy win over Louisiana Monroe but was hit-and-miss during the next four games in wins over Chattanooga, Missouri, South Carolina, and Florida. Although his passing statistics were glamorous compared to his performance in the first game of the season, glimpses of his toughness and proving he was more than a one-dimensional quarterback were on display.

In an effort to get Levis back into a rhythm following the win over the Gators, offensive coordinator Liam Coen told Levis to remain “calm” in the midst of a grinding conference schedule that would make or break the season.

“The theme for him the whole week was (to) calm down — slow down,” Coen said. “Slow it all down, play your mind down, slow your feet down and I thought you saw that. The touchdown to Wan’Dale (Robinson) was all him. It was designed to go to (Brenden) Bates. The kid played his tail off. I thought he managed the game well.”

During a film review of his performance against Florida, Levis noticed his feistiness in the pocket and worked with Coen during practice last week to calm his footwork.

“I just kind of really got antsy with my feet, and I just got to trust that the timing in practice as long as we are going full speed is going to be the same as timing in the game,” he said. “Just slowing my footwork down and just trusting the progression, and I think I did a pretty good job of that (Saturday night).”

From the first snap, it didn’t take long for Levis to settle in against the Tigers and Kentucky coach Mark Stoops noticed the difference.

“You could see that carrying over and you could see his confidence stepping up,” Stoops said. “Then the way he plays it on the line, and he runs so physically, that just gives everybody a great boost, as well. He’s a tough kid and just getting better and better.”

His hard-fought runs against the Gators kept several drives alive and his ability to dodge defenders and drag some of them on his shoulders on Saturday night helped lead the No. 11 Wildcats to a dominating 42-21 win over LSU that gave the offense momentum going into Saturday’s Southeastern Conference Eastern Division showdown against Georgia Saturday, now the top-ranked team following Alabama’s 41-38 loss to Texas A&M late Saturday night.

In Kentucky’s second win over LSU in the past three rare meetings between the two teams, Levis threw for 145 yards and three touchdowns, but his legwork caught the Tigers off-guard and proved to be effective for the Wildcats. He finished with 75 yards rushing and scored a pair of touchdowns as Kentucky doubled up the score on an LSU squad that is 8-8 since winning the national championship just two years ago.

“I really thought he played exceptionally well,” Kentucky coach Mark Stoops said. “You could tell early on, just to me, his comfort level was there. You know, he looked really poised, really confident, and just going through his progression, making some really nice throws.”