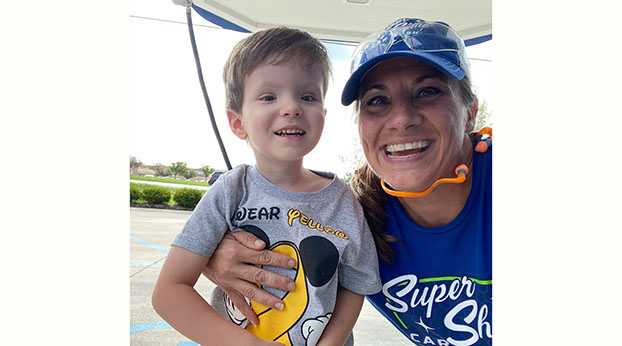 Dozens of walkers hit the track at George Rogers Clark High School at the Walk N Roll for Spina Bifida last Saturday, and for the Winchester couple who organized the event, the effort was for someone special – their son.

Amie and Steven Moore had never heard of the condition until a few months into Amie’s pregnancy with their son, Lincoln, but they have been dedicated to spreading awareness about it since then.

“A lot of people don’t know about it, and I feel like in the last couple of months, we’ve brought even more awareness to spina bifida in this community specifically than there ever has been,” said Amie Moore.

Spina bifida involves an incomplete closing of the spine and membranes around the spinal cord during early pregnancy. The condition affects around 1,400 children born each year in the U.S. and causes developmental delays and impacts motor skills.

The event doubled the amount of money it raised for the Spinda Bifida Association of Kentucky last year.

“Between the auction, donation and the car was at Super Shine, we made over $2,000,” Moore said. She added that “about 40 people” attended the event.

Moore said that her son “walked some” at the event and enjoyed himself, especially taking rides with his great-grandmother on her motorized wheelchair.

“She put him in her lap, and she rode him around the track. He kept saying, ‘Let’s do it again.’ I think that was the highlight of his morning,” she said.

Moore said there “absolutely” will be a third Wall N Roll in Clark County next year.