Harris serves as student member of Clark school board 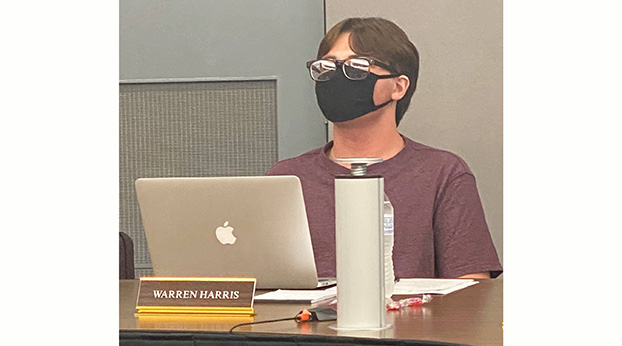 Warren Harris takes notes during his first meeting as a non-voting member of the Board of Education. He is the first CCPS student ever to hold such a role.

The newest and youngest Clark County Schools Board of Education member wants to bring the district together.

“In the past, we’ve been a district of schools then a school district,” said Warren Harris. “We haven’t always operated in unison like we should, so I really think that at the board level, we have a big opportunity to change that.”

The 17-year-old George Rogers Clark student is a non-voting member, but he is determined to bring a student’s voice to the board.

“I voice my concerns, along with the students I represent, their concerns, to the board during meetings,” Harris said. “So we can feel, as a whole student body of Clark County, well represented and well-spoken up for.”

Harris first encountered the idea of a student representative on the board two years ago when he was elected to the Kentucky Student Council Association.

“A project that we collectively thought was getting a student on to each of our school boards,” Harris said. “There were quite a few of us from different regions or different counties. I don’t think it was a thing in any of our counties.”

Harris reached out to board chair Ashley Ritchie about it, and she thought it was a good idea. The only problem was timing.

“Then we weren’t in school. We’d been kicked out because of COVID. So it didn’t really pan out,” Harris said.

The hiring of a new superintendent, Dr. Molly McComas, opened another window of opportunity during the summer.

“Ms. Ritchie brought it up to me again and asked if it was still something I was willing to work for and pursue,” Harris said.

Of course, he said he would. Ritchie pitched the idea to Dr. McComas, who quickly put her support behind it.”

“I worked for Owen County Schools about 15 years ago … They have had a student board member, and I’ve always admired the commitment to student voice,” McComas said about why she thought the proposal was a good idea.

The superintendent took the proposal to the board in August and found the body supported it. After two policy readings, the board voted to create the position in September.

The board reached out to the high school to see which students with a track record for service would be the best fit. Several were considered, but principal Jamie Keene decided to nominate Harris.

“In the last three years at GRC, Warren has demonstrated a strong passion for enacting positive change and an enduring desire to help others. He is constantly looking for ways to enhance the high school experience for himself and others,” Keene wrote in his letter of recommendation to the board.

During his high school career, Harris started the L.E.A.D. Club, which focuses on mentoring younger students across the district.

He has also been active in the GRC student council, the Key Club, FCCLA (Family, Career, Community Leaders of America), and the school’s paper, Smoke Signals.

When Harris got the news about his appointment, he said he was “dumbfounded” and that it was surreal to him “to be the first to do something, that in my eyes, is so important.”

So far, each board meeting Harris has attended has brought something new, but he said that he respects the proceedings.

Harris also has a positive impression of his fellow Board members.

“I am always impressed by how much each Board member values student voices as well as students in general.”

Dr. McComas certainly values the perspective Harris brings to the board.

“His presence alone helps maintain perspective of the important work that is ahead of us,” she said. “He represents what we should stand for as a district, increasing high-quality authentic opportunities for students that will lead to stronger communities.”

Outside of school, Harris enjoys writing poetry and songs, taking care of horses, cooking, and spending time with his family and friends. He plans to attend college next fall and hopes to become a middle school teacher.