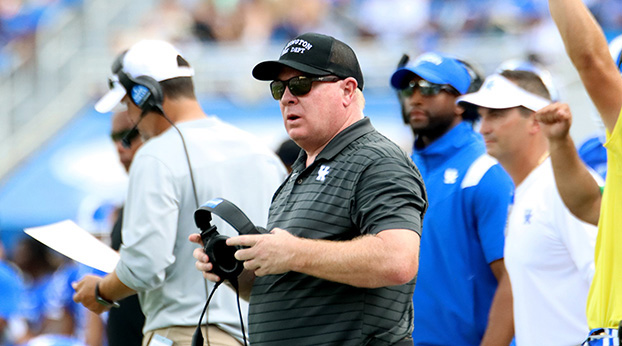 Kentucky coach Mark Stoops has earned the respect of coaches around the nation, including Georgia head coach Kirby Smart. - Photo by Jeff Moreland 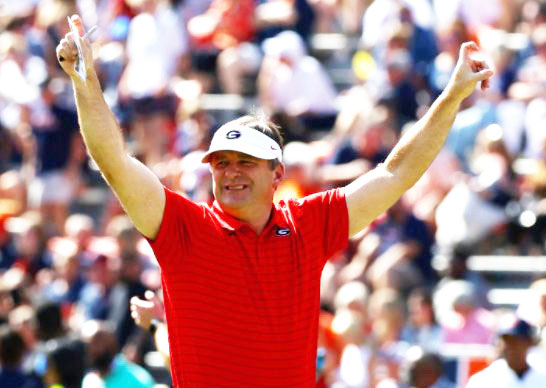 Georgia coach Kirby Smart and the Bulldogs are ranked No. 1 going into Saturday’s showdown against No. 11 Kentucky. (Georgia Athletics Photo)

“When you look at what coach Stoops has been able to do, it’s pretty remarkable,” the Georgia coach said ahead of his team’s SEC East showdown against the Wildcats set for Saturday. Both teams are undefeated at 6-0 and 4-0 in the league standings.

A difference-maker in his own right since he’s been at the helm at Georgia, Smart said Stoops is a “really good football coach” going back to his days at defensive coordinator at Florida State.

“I’ve known him a long time,” Smart said. “(I’ve) recruited against him. We went head-to-head on a lot of recruits back when he was Florida State’s defensive coordinator and I was at Alabama. He is a tremendous coach (and) a tremendous builder of men.”

Under Stoops, Smart said the 11-ranked Wildcats have emerged in all phases, from the recruiting process to the finished product on the field, and added Kentucky is performing with consistency while performing at a high level.

“I say it all the time, to be a good football coach you have to have all of the phases,” he said. “The recruiting phase, the organizational phase, the development phase, the three phases – offense, defense and special teams, and they are really incredible at all three. They have a great system set up that they recruit to. They develop guys.”

Although Kentucky has been outscored 35-3 in the last two meetings between the two teams, Smart has taken notice of Kentucky’s improvement on the offensive side of the ball under first-year offensive coordinator Liam Coen.

“It seems like every year you are talking about their defense, and they are doing a tremendous job offensively this year, as well,” Smart said. “The quarterback and transfers they have gotten have really added juice to their offense, and they have a great special teams unit as well.”

In a game that could determine the winner in the SEC East, Smart said the Wildcats will pose a challenge for his squad, which carries an 11-game winning streak its the contest. The Wildcats’ last win in the series came in 2009 when Kentucky overcame a 20-6 halftime deficit and rallied for a 34-27 victory in Athens.

“The challenge ahead is for us — I think our kids embrace that,” Smart said. “It seems like each week, the last three, four, five weeks, we’ve had big games and we have another opportunity. That’s why you come to the SEC. To play in big games.”

Georgia climbed to the top of the rankings for the first time since 2008 following Alabama’s 41-38 loss to Texas A&M last weekend, and Smart referred to the top spot as “just a number.”

“I don’t see a plateau,” Smart said. “The goal is to be No. 1 at the end of the season. You always know that. Everybody’s goal is there, but to have an opportunity to do that you have to be in the top four. That’s the most critical part. We won’t get caught up in that and let you guys write about it. That’s not a burden we carry. The burden we carry is how we play.”

Still, the Georgia coach said there’s added value to the contest against the Wildcats and added “this game speaks for itself” and said the fans could “be the difference in the game.”

“I don’t think sometimes they acknowledge that because they think that everything’s going to be easy and it’s going to be home,” he said. “You can’t think that way. You can’t be apathetic as a fan and think ‘well, we’re Georgia.’

“That’s not the case because this is a high-quality football team. We need the extra advantage of playing at home just like we had to go up against it last going to Auburn. We need that same advantage this week.”

Kentucky also is expecting the same from its small pocket of fans at Sanford Stadium.

“I expect us to be loud as we can be with as many tickets as they allot us, but always appreciate our fans and showing up,” Stoops said. “Hopefully we will hear the number of the amount of people we have there.”

Keith Taylor is the sports editor for Kentucky Today. Reach him at keith.taylor@kentuckytoday.com or via Twitter at keithtaylor21