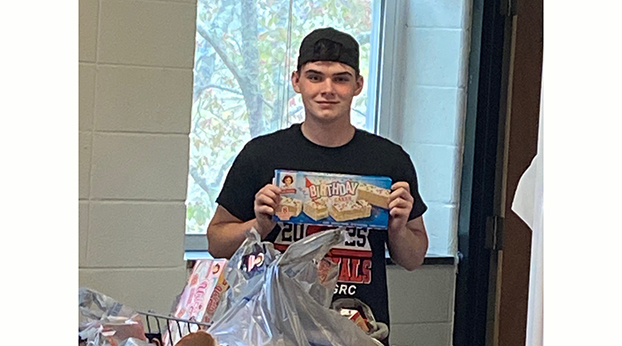 16-year-old Xazavier Osborne made sure to share a birthday cake for those he donated food to at Anna's House in Trapp. - Photo submitted by Shawana Osborne.

Xazavier Osborne’s mother wanted to know how he wanted to spend a milestone birthday, his 16th.

“For my birthday, my mom asked me what I wanted to do and how I wanted to celebrate,” said Osborne. “I could have gone anywhere or had a big party.”

The George Rogers Clark High School freshman took a few days to think it over before he answered.

“I went up to her and told her for my birthday that I want to go help the homeless,” Osborne said.

That’s how, instead of asking for a car like most boys his age, Osborne and his family ended up taking carloads of donations to Anna’s House, run by Winchester-based Lady Veterans Connect.

On Thursday, Osborne and his family went to Walmart and bought “six buggies full of food” to help prepare food boxes for the women staying at the Trapp facility, said Xazavier’s mother, Shawana.

On Friday, when they arrived to donate the food, the facility’s staff and volunteers were stunned.

“They weren’t expecting it all,” Osborne said.

Shawana Osborne said they “wanted to feed around 50 people” and that the staff “wasn’t sure if they were going to have room” for all the donations.

Phylliss Abbot, the organization’s founder and president, said it will spread the donation to help several veterans in need.

“I kind of figured it was going to come,” she said. “Because he has always been the type that has wanted to give, especially to the veterans, because our whole family has served in the military.”

Anna’s House opened this spring and provides a transitional home where female veterans in need can learn life and job skills, and receive assistance with their physical and mental health.

Osborne said he was not familiar with the facility, but after donating, he was given a tour of it and was impressed by what he saw at Anna’s House.

“They are very kind people,” he said. “The impact the community has had on these lady veterans, and all the other veterans who have come inspires me. It is awesome to see that others want to give back.”

Veterans and what they do for the nation have been a life-long interest and inspiration for Osborne. To him, it is not fair to watch them suffer.

“To know that some of them come home and they don’t have all these great things like they deserve, while we are inside eating dinner and we are sleeping in cozy beds; they could be out on the streets under a bridge,” he said.

Even when Osborne does things that he enjoys, he said that it hurts him when veterans suffer, so he will help them in any way he can.

“Anytime, anyway and anywhere, they need help, I’m there,” he said.

Abbot said that Osborne is “awesome,” and there need to be more teenagers like him.

“We need more young people like him that are focused that way, more than playing games on the computer or internet, on being aware in the community that we have veterans and people in need. They can go out and make a difference and change a life,” Abbot said.