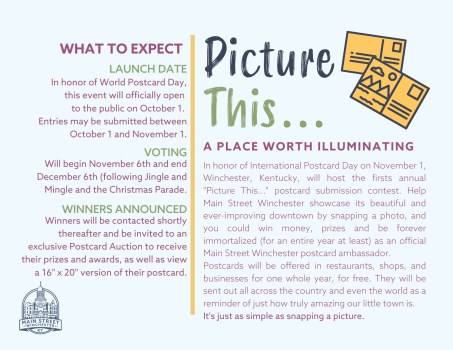 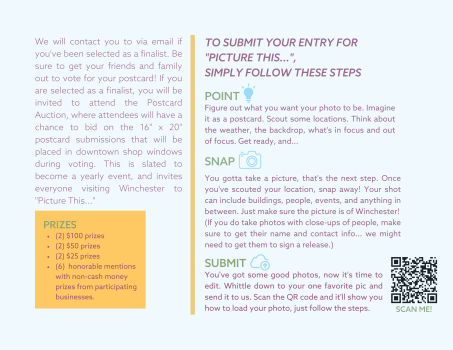 In honor of the upcoming International Postcard Day on November 1st, they are hosting the first annal “Picture This…” community postcard competition.

The competition is open to anyone who wants to submit a photo of Winchester. All entrants will have a chance of winning cash, prizes and becoming a “Postcard Ambassador” for an entire year.

Winners will have their photos featured on postcards that will be offered at restaurants, shops and offices to be mailed out all across the country.

Submissions for the contest are now being accepted until November 1.  Finalists will be highlighted on life-sized postcards to be placed in various downtown locations, where visitors may vote for their favorite card via the supplied QR code, or on the tourism website.  Voting will begin in November and continue until the weekend of the Winchester Christmas Parade

The winners will be announced at December banquet which will also feature an auction where attendees may purchase the original life-sized postcards.

Earlier this year, Main Street Winchester  and the tourism department came up with the idea to place postcard inside downtown restaurants and businesses.

Business-owners were instructed to give patrons a free card as long as they promised to mail it to someone out-of-town as a reminder of downtown’s beauty.

Jones Aerial Photography was contacted to provide the inaugural postcard image, which featured an aerial photo of the Clark County Courthouse at night.

Official rules and guidelines for submission can be found at the Winchester Tourism web page, or on instruction cards located in most downtown businesses.  Questions about the project may be directed to info@visitwinchesterky.com or rboyd@winchesterky.com.