A bike theft, forgiveness and the kindness of strangers 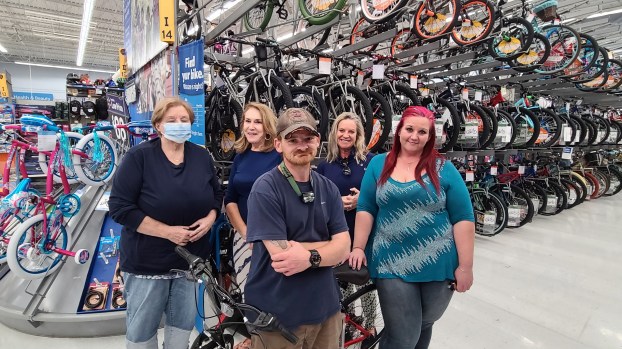 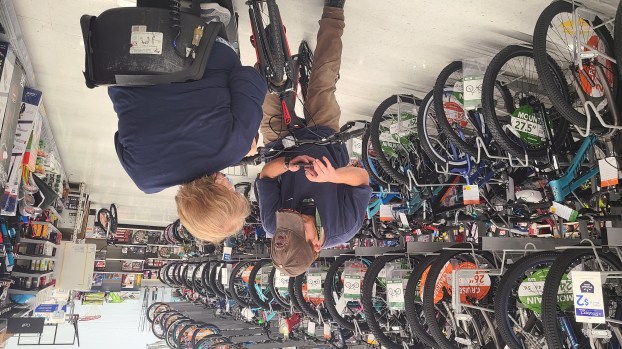 Jones and Haggard exchange photos. The pair had never met until Monday night at the Winchester Walmart. - Photo by Warren Taylor

Anyone who says a person cannot depend on the kindness of strangers has never met Aaron Jones.

The 36-year-old Winchester resident works at the Rally’s on West Lexington Avenue and regularly rides his bicycle to work. He said he usually leaves it between the restaurant’s shed and its dumpster, out of sight.

No one ever bothered Jones’ bike before, until last Saturday as he finished up his shift at around 1:30 a.m.

“Right before clock out, I looked up and went back out to take my last box to the trash can, and there wasn’t a bike there,” Jones said.

The bike was Jones’ primary mode of transportation when his mother could not give him a ride to work. He estimated that the trip from his home on Blueberry Lane usually takes around 20 minutes.

“I wasn’t looking forward to riding my bike back home at the end of a workday anyway, but I would have given anything to have ridden it home that night,” Jones said about his reaction to his bike’s theft.

Hoping to locate his bike, Jones posted in the popular local Facebook group, You Know You’re From Winchester, Ky.

Jones said about why he made the post “Just to see if anyone would reach out or maybe had a guilty conscience and would bring it back.”

Despite the theft, Jones does not have any ill wishes for the person who took his bike.

“I would have fed them or helped them out,” he said. “I figure if you’re hard up enough to do something like that, you need some help.”

Jones did not find his bike, but he did make an impression on a trio of Winchester women who saw his post.

Sarah O’Daniel said she was impressed by Jones’ temperament.

“The comment that he put on there, there was no anger at all,” O’Daniel said. “He wasn’t going to call the police regardless.”

Heidi Blackwell said what stuck out to her was that Jones just wanted his bike back and was not angling for a new one.

“He didn’t ask for anything,” she said.

So the two, along with Beverly Haggard, made plans in the comment section of Jones’ post to buy him a new bike Monday night at the Winchester Walmart. It would be their first time meeting.

“The three of us don’t know each other, but now we do,” said Blackwell, who also got donations from coworkers.

All three women agreed that Jones deserved a bike if he is willing to work so hard. It’s what made Haggard want to help.

“I figure if he is able to get out there and work until 2 o’clock in the morning on Saturday night, then he needs a bicycle to get home,” she said.

The bike purchased for Jones is the very first brand new one he has had in his life.

“I don’t really like driving, so I’m not pushing for a diver’s license … So a brand new bike is like a brand new car to me,” Jones said.

Amanda Skinner met Jones at church 25 years ago, and the two have been friends ever since. She said his willingness to forgive does not surprise her.

“He is one of the best people I know,” Skinner said of Jones. “He has always treated me with respect. Our grandmothers were friends, and we grew up in church together. He’s one of the only people I know who grew up in a church that still has those morals instilled in him.”

If there is one drawback to the situation, according to Jones, it is this.

“I don’t think they will let me ride my bike in the store,” he said with a laugh and a bright smile.