UK players won’t let loss get them down 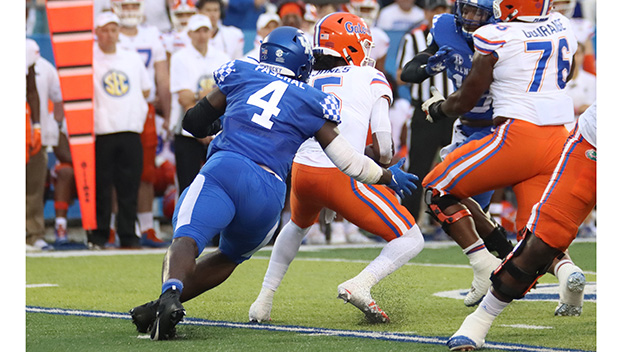 Kentucky defensive end Josh Paschal (4) says the Wildcats will not let off the gas following a loss to top-ranked Georgia. - Photo by Jeff Moreland

Senior defensive lineman Josh Paschal is Kentucky’s inspirational leader and he says not to worry about the Cats letting the 30-13 loss at Georgia impact how UK will play at Mississippi State Oct. 30 after a bye week.

“We don’t like losing,” Paschal said. “It’s not something we are used to now. The vibe (after the game) is to work hard and heal our bodies (during the bye week). We are not comfortable with this loss. We are going to bounce back and be a hungrier team than before.”

Paschal said the players learned that they have to “stand firm in adversity” in the loss to No. 1 Georgia.

“Give them credit. Against the No. 1 team, you can’t make mistakes,” Paschal said. “We just had some missed assignments on our part. It was kind of us beating ourselves at times.

“We have to learn how to respond and limit them as well. We have to keep going, keep pushing. When you face adversity, jump on top of it. We are blessed to have a bye week to rest our bodies but at the same time we have to put in the work to make sure it does not happen again.”

Kentucky recruiting coordinator/tight ends coach Vince Marrow said having this week off before going to Mississippi State is what the team needed.

“Sometimes you have got to thank the Good Lord for things that happen and this is the right time for that (the bye week) to happen for us,” Marrow said. “We lost (Octavious) Oxendine, (Marquan) McCall to injuries. (Offensive tackle) Darian Kinnard is banged up. This is a much-needed rest.

Marrow thinks there’s a chance McCall, a nose guard, could play some at Mississippi State. He is confident receiver Josh Ali will be back after missing two games.

Even freshman receiver Dekel Crowdus, who has not played because of a preseason foot injury, might be ready to go.

“Dekel is moving around. I want to say yes (on him playing) but that is up to the trainers,” Marrow said.

“Before he was hurt, he was like Wan’Dale (Robinson). He was the fastest guy on the team and we could use that speed.”