WHERE IN THE WORLD? “Homecoming” for Frances Tandy Bush 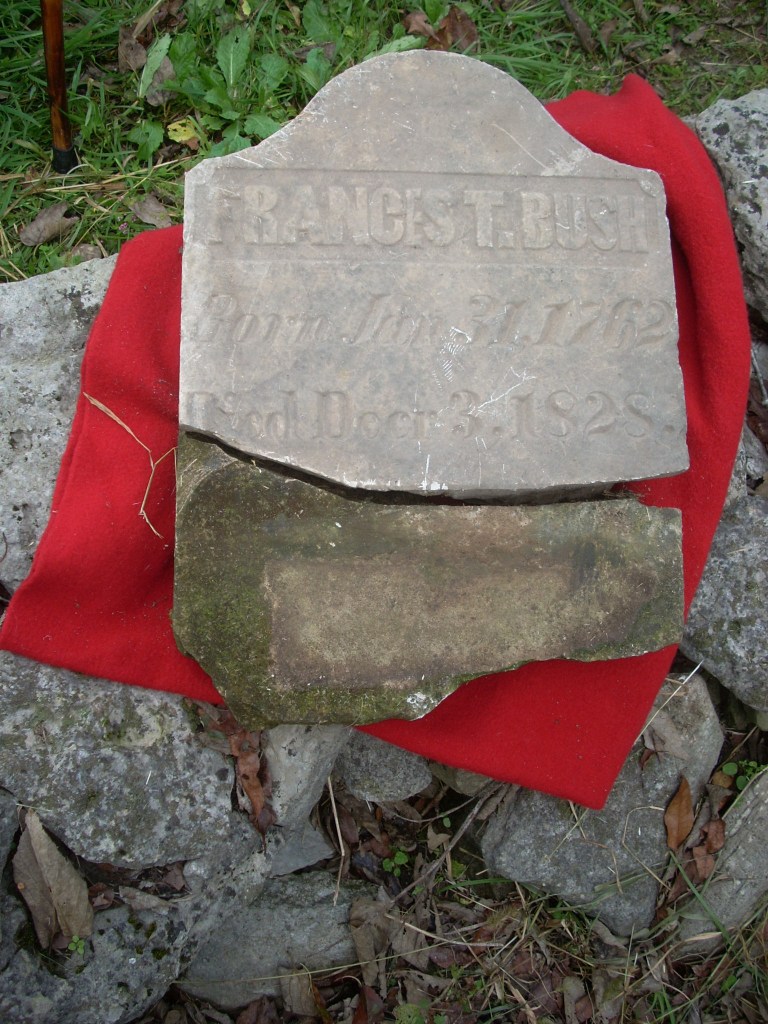 Among Clark County’s early cemeteries, few, if any, are more historic than the graveyard of Capt. Billy Bush.  His burial place is located at the top of a hill across the road from the Olde Rock Barn on Old Boonesboro Road.  Billy’s gravestone is in excellent shape, and his son Thomas’ stone is broken but legible.  Sadly, the gravestone for Billy’s wife Frances has been missing from the cemetery for at least 50 years.

Local historian, Kathryn Owen, recorded the cemetery in her book, Old Graveyards of Clark County, published in 1975.  “Captain William Bush; born June 26, 1746; died July 25, 1815; He was the friend and companion of Daniel and others in the settlement of Kentucky.

That was where things stood in June of this year, when I received the following note from Ken Fiekert.

“I’ve recently moved from Rising Sun, IN to Mayfield, KY.  I found the top half of a tombstone in my yard which belongs to Frances Bush, the wife of Billy Bush.  I’ve attached a photo of the tombstone.  After doing a bit of research, I purchased your book, Captain Billy Bush and the Bush Settlement, in hopes of finding a reason her tombstone wound up in Mayfield.  As of now, I have not been successful in tying the two together.

“I’m writing this note for two reasons.  One is to find out if you have any information as to why her tombstone is in Mayfield and, since I thought that you may be interested, to also let you know where the tombstone is.

“I have been a student of the early history of the Ohio Valley for many years and find the tombstone’s location fascinating and perplexing.  I would appreciate it if you would reply at your convenience.”

That was quite a shock, and a thrill, but I had to tell Ken I couldn’t solve the mystery from here.  However, I was prepared to travel to Mayfield for the stone.  He answered a few days later.

“Even though the tombstone is a great decoration and curiosity for me, I know in my heart that its rightful place is at the head of her grave.  I was happy to read that the graveyard still exists.  I tried to locate Dykes Farm Cemetery where records show she and Billy were buried, but could not find it in current records, so I assumed it was no longer in existence.

“I spoke to the previous owner of my home when I found the tombstone, and she has no idea where it came from.  The property has been in her family for many years.  She is in her 80s.

“I would prefer to bring the tombstone to Clark County rather than you making the trip here.  With the research I’ve done, I almost feel like I’ve come to know Frances and Billy, and would love to see their graves.  This is actually pretty exciting for me.”

Today was the day.  Thursday, October 14, 2021, Frances Tandy Bush came home.  Ken and his lovely wife Vickie drove up from Mayfield with the stone.  Frances and Billy, reunited at last.  We had a small gathering at the cemetery to welcome her back.

William “Billy” Bush was born in Orange County, VA, and as a young man removed to western Virginia, where he became friends with Daniel Boone.  He accompanied Boone and William Russell on their aborted attempt to settle Kentucky in 1773.  Bush came back for good as one of Boone’s trail blazers in the spring of 1775.  While living at Boonesborough, Bush staked numerous claims to land opposite the fort on the east side of the Kentucky River.  Boone later surveyed these lands for Bush, who encouraged other Virginians to settle there.  Among those who came to the Bush Settlement was a group that established Providence Church, an early Baptist congregation.

In 1778 Bush returned to Orange County to woo and marry Frances Tandy Burrus, a daughter of the wealthy planter, Thomas Burrus.  She and Billy set out for Kentucky with a group of Orange County residents in 1780.  At the Wolf Hills (now Abington, VA) the group settled for four years, while Billy finished arranging farms for them across the Kentucky River from Boonesborough.  Billy and Frances finally made it to Billy’s cabin in Clark County in 1784.  A Baptist church service, with Rev. Robert Elkin presiding, was held at their home on November 27.  Billy and Frances farmed their land and raised nine children to adulthood.

This historic cemetery needs some work.  Some vegetation should be removed; the low stone fence surrounding the graves has to be restored; and two broken gravestones must be repaired.  Southwest Clark Neighborhood Assn., Inc. will be holding a fundraising event soon and they have started a GoFundMe site for donations.