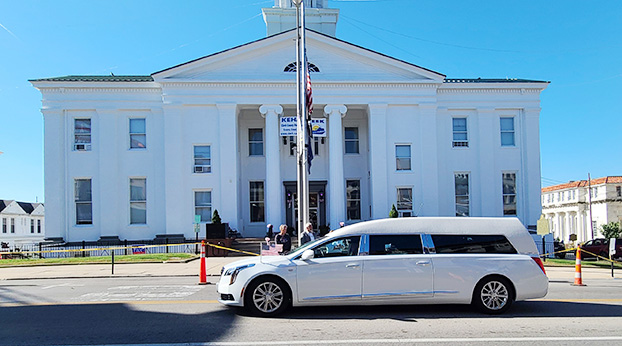 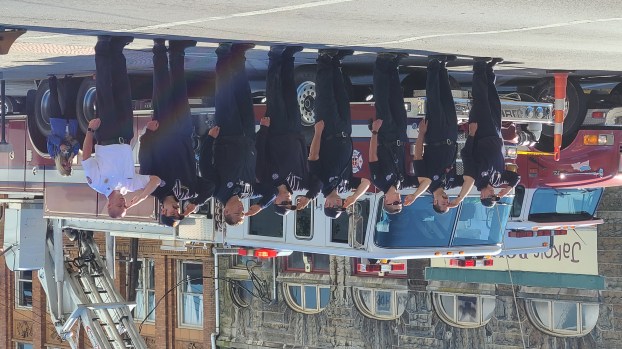 Local firefighters stand at attention as the hearse passes by on its way to Winchester Cemetery. - Photo by Warren Taylor 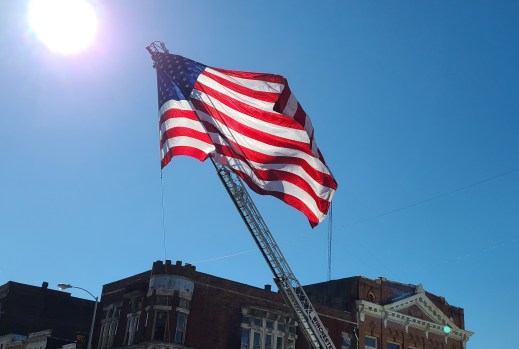 A large American flag hangs from the ladder of a firetruck. The flags outside the courthouse were lowered to half-mast due to Pace's death. - Photo by Warren Taylor

A life-long resident of Clark County, Pace was reared in public service at an early age. His father, the late Donald Pace, was school superintendent for many years.

“As a young man, I think that is where his development and formation began,” Winchester Mayor Ed Burtner said during the service. “Learning from his parents what it means to be a servant leader.”

“He knew that servant leaders had to understand and follow these four basic principles: service above self, service first, being capable of being trained and schooled, and being ready to answer the call,” Burtner said.

Colleagues remember the 44-year-old judge as a staunch Republican dedicated to conservative values.

“I remember when he ran for judge-executive, he proudly touted this ‘Christian. Conservative. Republican,’” said State Senator Ralph Alvarado. “I remember the joy that all of us felt that evening during his election and the new majority in the fiscal court.  It was finally an opportunity for growth, Christian values, and hope in the courthouse. And Chris was making good on that hope.”

Alvarado recalled that most of his conversations about the community with Pace were centered around job creation, tax reduction, and infrastructure development.

Some will remember him for his easy smile and love of people.

“He loved going out and taking pictures with people in the community,” said Interim Judge-Executive Daniel Konstantopoulos. “For those who follow Judge Pace on social media, you know what I am talking about. He’d wrap that big arm around you and give you the biggest smile on his face. In that smile alone, you could see his love for people.”

Judge Pace was an ardent Christian.

“He had a heart for a lot of things, but his hope was in the grace and the mercy that is found only in Jesus Christ,” said Pastor Brock Carlile, a longtime friend of Pace. “His greatest desire was that you would put your hope where he had his.”

Pace’s funeral procession took him past the Clark County Courthouse one final time later in the afternoon. The building was closed for the day, and its flags lowered to half-mast in his honor. Several citizens and local firefighters gathered to watch the procession.

Pace was elected judge-executive in 2018 by defeating three-term incumbent Henry Branham. According to Kentucky law, Gov. Andy Beshear has 30 days to appoint someone to serve the remainder of Pace’s term, which ends in January 2023.

Pace passed away due to complications related to COVID-19 at Clark Regional Medical Center last Thursday. He is survived by his wife Shannon and three children, Jack, Roman, and Maria.