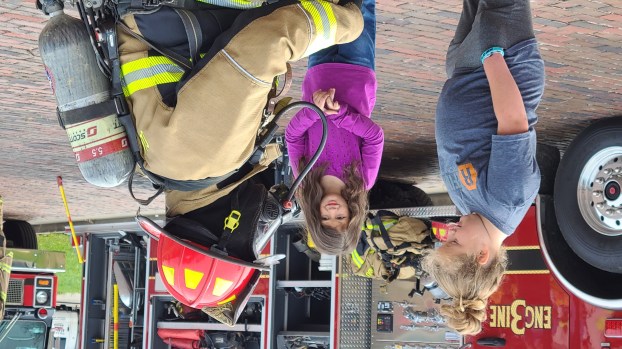 Mira and Hadley Martin talk with Clark County firefighter Shaun Porter during the Sound of Safety event on Saturday in Winchester. - Photo by Warren Taylor 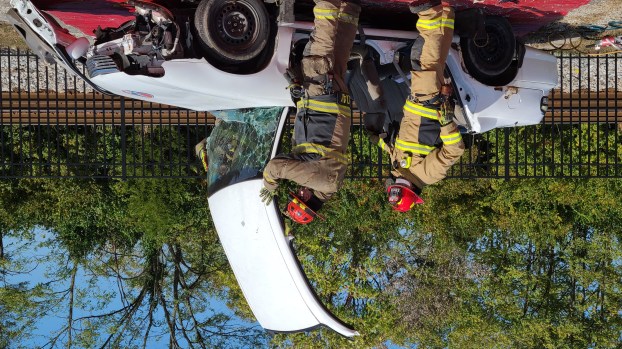 Members of the Clark County Fire Department performed an extrication during the event. - Photo by Warren Taylor 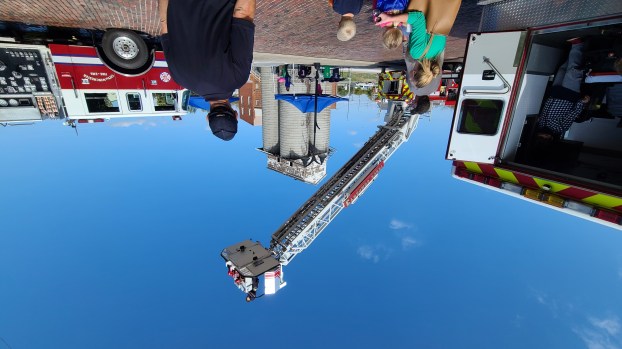 The event gave local children a chance to see fire equipment like the ladder truck in action. - Photo by Warren Taylor

Mira and Hadley Martin want to be either firefighters or police officers, and the two got a closeup of one of their possible futures on Saturday afternoon.

The pair attended the Sound of Safety, hosted by the Clark County and Winchester Fire Departments, on Depot Street.

The event gave the public a chance to meet local fire and rescue personnel, see the department’s vehicles, and learn some fire safety.

“We got to see an [car] extrication, and we also got to see a flow path in a structure and how that works,” said Brandon Stamper, a battalion chief with the county fire department.

It was their first time getting in-person fire safety instruction for some children in almost a year and a half.

“One of the things that was nice about this was the kids didn’t get fire prevention in schools because of COVID,” Stamper said. “We were able to do a little bit of fire prevention for them outside in a little better situation.”

Mira’s and Hadley’s mother, Crystal Martin, said the live-fire simulation was the most helpful thing the girls learned.

“I think it was neat how they learned about how the fire moves through the house and why we keep doors shut and have a meeting point outside the house,” Martin said.

The pandemic limited the department’s interaction with the public, so Stamper said it was good for the men and women of the departments to get “back to the basis” of what they do, which is “communicate and interact” with people.

The event also helped alleviate some children’s fears if they come across a firefighter in their full gear.

“When we are in our gear and stuff, a lot of kids feel that we are scary, so when they get to meet us and stuff like that, it makes them more comfortable with us,” Stamper said.

Clark County firefighter Shaun Porter said that he loves events like Sound of Safety because he gets “to see the kids getting excited” and has fond memories of events like it growing up in Catlettsburg, Kentucky.

“Getting into the big old fire trucks and pretending to drive them–that was my favorite part,” Porter said.

In his first year with the department, Porter gets to drive the truck for real, and his passion for the job is evident.

“I love this job. There isn’t anything better,” he said.

For anyone like Mire and Hadley who potentially want to follow in Porter’s footsteps, Battalion Chief Stamper said the best thing they can do is get an education first.

“Stay in school,” he said. “You can’t be a firefighter if you don’t get your diploma or GED.”

Another thing to do is get an early start during their teen years with the Explorer Program, which the city and county fire departments offer.

“Every hour that you get training goes toward your professional career,” Stamper said. He added that several recent hires were a part of the program in their younger years.