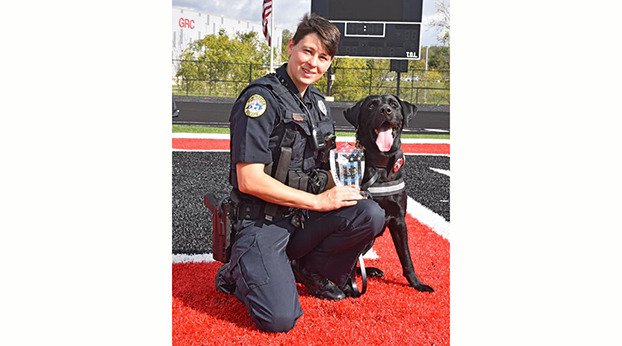 Officer Webster and Crocket have been partners for two years. - Photo sumbitted by Winchester Police Department

When it comes to partners in the Winchester Police Department, Officer Kelly Webster’s has a nose up on the competition.

Webster is the department’s K-9 handler and is partnered with a three-year-old black labrador named Crocket.

“I’ve got my best friend with me 24/7,” Webster said about working with Crocket. “I couldn’t ask for a better job. He is the best, best boy!”

Crocket was the second-best dog at the Bluegrass K-9 Narcotics Trials held earlier this month in Mount Sterling.

“They have a lot of expert trainers in — fantastic trainers — and train you and give you advice about getting better,” Webster said about the four-day event.

On the last day, there is a competition.

“This year, they put out a bunch of items,” Webster said. “Some items didn’t have anything in them. Some items had a certain type of drug in them with a set amount … Basically, you get three minutes, and however many finds you get, the better dog wins.”

Webster said she was delighted with Crocket’s performance.

“I am very proud of him. I’ll let him milk it for at least a week,” she said.

Webster is a native of Irvine and has been with the Winchester PD for close to five years. She said that she noticed that the department did not have a dog and told Chief Kevin Palmer if they ever acquired one, she would be interested in being the handler. A few years later, she got her wish.

“He called me into his office and asked me if I was still interested. I said ‘Yes,’ and he was like ‘Alright, put it together,’” Webster said.

Palmer said that Webster was “the perfect candidate” as the handler, but he had had one stipulation about the dog: it had be friendly and have good social skills.

Webster was allowed to pick her new partner and made dozens of calls before finding Crocket in Greenup County.

“He had so much energy and was so sweet at the same time.  He is extremely focused when time to work and a total goofball the rest of the time somehow. I really related well to him,” she said about why she picked him.

Palmer said that the bond between Crocket and his handler is obvious.

“He and Kelly are a great team and ambassadors for our police family,” he said.

Crocket is certified in obedience, basic tracking, article searches, and narcotics through the National Narcotic Detector Dog Association. He is trained to detect methamphetamine, cocaine, heroin, marijuana, and ecstasy.