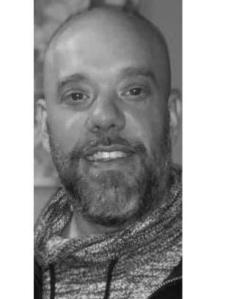 David was born at Wright Patterson AFB in Dayton, Ohio, on May 14, 1974. As a military child, he spent his formative years in England and Florida before permanently residing in Colorado.

In addition to his parents, David is survived by three children, David Mullen III, (Winchester) Dane Mullen, and Cassidee Mullen; (Aurora, CO), one granddaughter, Nevaeh Mullen; (David III), one brother, Bill Mullen; and several extended family members. What brought David the most joy in his life were his children.

To say that he was a dedicated father is an understatement, for he had an unwavering devotion to them that defined his character. David was a supportive and protective brother, a loving and gracious son, and a new and elated grandfather. His integrity and kindness earned him much respect by his coworkers and friends at United Airlines. He enjoyed playing basketball and softball with friends, fishing and camping with family, and was an avid Pittsburgh Steelers fan. Never one to turn down a deep philosophical conversation or a light discussion over a new film, David was constantly seeking knowledge and further understanding about all elements of life and the cosmos. Not only did he bring smiles and laughter to those around him, but he also brought much care and empathy, having a magnetic personality that those around him were lucky enough to experience. The world is a much sadder place without him. David will never be forgotten by those whose hearts he touched.

Funeral Services will be held at 2:00PM on Friday, October 29, 2021, at Scobee Funeral Home in the Leon Pace Memorial Chapel, 219 W. Lexington Avenue, Winchester, Kentucky by Pastor Ron Barker. Burial will be in the Winchester Cemetery. To sign the online guestbook visit www.ScobeeFuneralHome.com.

Visitation will be at 12:00PM until time of service.

The family would like to thank the ICU staff at UC Health Hospital, Highlands Ranch, CO, for their professional care and United Airlines for being a top rate employer that takes care of their people.

Memorial donations may be made to the charity of your choice.