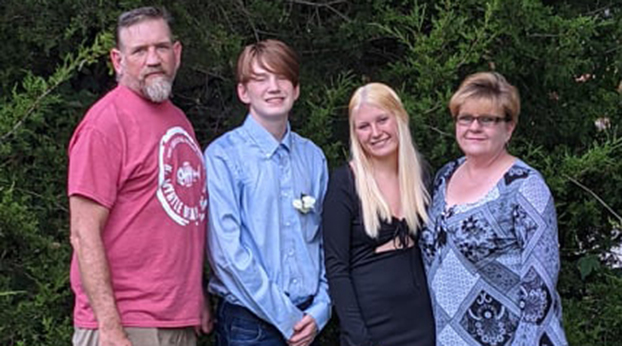 Anniston Reed, seen in a black dress, is safely home after being reported missing on Monday. Also in the photo is David Reed (father), Janet Reed (mother) and Presley Reed (brother). - Photo submitted by Janet Reed.

17-year-old Anniston Reed was reported missing on Monday, and after a search by family, friends and the Winchester Police Department, was located safe and unharmed late Tuesday.

Her mother, Janet Reed, said that the sequence of events that led to Anniston’s disappearance started on Thursday.

“Initially, she went to stay with a friend on Thursday night,” Reed said. “She did not have contact with me until late Friday evening.”

Anniston did not respond to any of her mother’s attempts to get in touch with her, nor did her friend.

Reed said that Anniston finally came home around 7 p.m. The pair argued, and the teenager left.

Her mother assumed she would see her daughter again the next day.

“Honestly, I thought she probably–Friday night she was upset–would go to a friend’s house, and I would see her on Saturday,” Reed said.

By Sunday, Anniston had still not come home. Reed found out that she texted a family friend, stating that she was safe, had no Wi-Fi access, and was on her way home. She never arrived and there was no word on here whereabouts.

A tip from a friend of Anniston’s mother led to Reed finally calling the police on Monday.

“A friend of her’s mother reached out to me and said that she overheard her daughter say where she may be, at which point I did call the police,” Reed said.

City police went to the address and verified that Anniston had been there but had since left.

“They did not know where she was going at that point,” Reed said. After that she filed a missing person’s report with the WPD.

While the police searched, and family and friends searched door-to-door, Reed made the decision to reach out the community online.

“I actually debated,” she said. “You don’t want to put personal business out there and things like that, but I was panicked.”

The response to Reed’s initial post in the Facebook group, You Know You’re From Winchester, KY If, garnered over 1,000 shares and many comments of support.

“It was overwhelming,” Reed said about the response. “I’m grateful for everyone that shared, everyone that looked and the police department, even the dispatcher on the phone was wonferful.”

All the searching paid off, Anniston was found in a home on Dale Dr. with a friend.

“I think she had been several places during the course of the day,” Reed said. “She wanted to come home but was afraid she was going to be in trouble.”

Reed said that the best thing parents can do if their child goes missing is to not give up and keep asking questions.

“Every little detail can help,” she said.

The most important thing, in Reed’s opinion, is to ensure that parent and child communicate with one another.