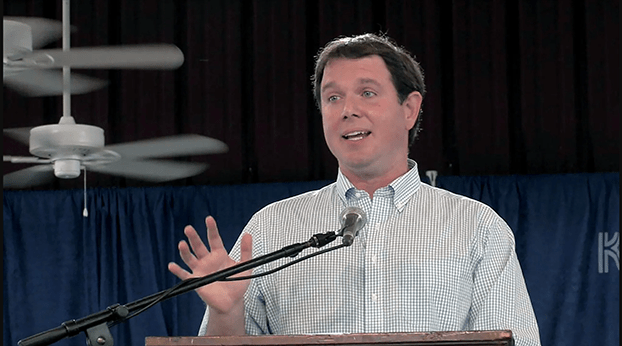 Looking back, Jones — who temporarily got taken off the air after RPK filed the FEC complaint — said this case demonstrates “why folks are hesitant to run for office,” especially if they’re an outsider candidate who lacks the support of the national Democratic or Republican parties.

“It was a very stressful time,” Jones told The Courier Journal. He said the state GOP basically was “bullying” him and “making it to where I couldn’t work.”

Plus, he had to pay for a lawyer to defend himself in the FEC case.

“I have a platform and a loud voice, but imagine if I didn’t,” he said.

In its now-closed complaint, the Republican Party of Kentucky claimed Jones violated federal rules by accepting prohibited corporate contributions from iHeartMedia, which airs the KSR show, and Simon & Schuster, which published his 2020 book “Mitch, Please! How Mitch McConnell Sold Out Kentucky (and America, Too).”

Right after RPK Chairman Mac Brown filed that complaint in early November 2019, Jones announced iHeartRadio (which iHeartMedia owns) had asked him not to appear on KSR in the coming days.

Later that month, he publicly declared he would not launch a Democratic campaign for McConnell’s seat — a decision he said had nothing to do with the FEC complaint — and then signed a five-year deal with iHeartMedia to keep doing the KSR show.

Nearly two years later, in September 2021, the FEC finally made a decision on RPK’s complaint against Jones, voting 6-0 that it found no reason to believe Jones violated federal rules by accepting prohibited corporate contributions or that iHeartMedia and Simon & Schuster did so by making prohibited corporate contributions to his prospective Senate campaign.

“But the frustrating part about this was that it was just a blatant abuse of power by McConnell and the Kentucky Republican Party, and it took two years in order for it to finally be sort of cleared,” he told The Courier Journal.

While the Republican Party of Kentucky and its chairman filed the actual complaint, Jones has suggested McConnell and his team were involved behind the scenes.

“The Kentucky GOP, they don’t wash their hands without asking Mitch (McConnell) first,” he said.

In November 2019, McConnell explicitly said his campaign wasn’t involved in getting Jones booted off his radio show.

RPK declined to comment this week on the now-resolved FEC case. The Courier Journal also sought but did not receive a comment from McConnell’s office.

University of Kentucky political science professor Steve Voss noted it isn’t unusual for a party to take action as RPK did here, saying: “At the end of the day, it’s parties doing what parties do, which is trying to promote the interests of the candidates on their side at the expense of candidates on the other side.”

“It strikes me as healthy that Matt Jones won this case,” Voss said, “because I don’t see why the public would have an interest in making it harder for the people who regularly communicate to them about politics to make the jump into public life.”

Jones, iHeartMedia and Simon & Schuster all rebutted the claims in RPK’s complaint in their responses to the FEC. Those documents, as well as the FEC’s analysis of the case, are now public.

In its response, iHeartMedia argued its continued airing of the KSR show with Jones as its host after he set up an exploratory committee to test the waters of a potential Senate campaign is a “textbook example” of conduct that falls under a longstanding exemption for the press.

The Republican Party’s complaint had argued Kentucky Sports Radio shifted from being a sports-focused program to a show that was “largely a campaign commercial” for Jones.

However, the FEC said its own review showed KSR occasionally ventured into political talk before Jones considered running for office.

As for Simon & Schuster, the longtime publisher told the FEC it agreed to pay Jones $90,000 as part of a standard book deal for “Mitch, Please!” and did not fund Jones’ book-related tour through Kentucky’s 120 counties, which the Republican Party argued was linked to his prospective campaign. (Jones likewise told the FEC he self-funded those trips.)

Simon & Schuster also said the Republican Party’s complaint used “circuitous, baseless, and repetitive rhetoric” and that its argument against the publisher was dangerous.

“If the commission takes the bait, it would violate the First Amendment and the (Federal Election Campaign) act’s press exemption, both of which protect the publication of information by citizen authors critical of their government and its officials,” Simon & Schuster told the FEC.

Jones told The Courier Journal it always was clear this case was baseless and said of Republican Party of Kentucky: “They were essentially arguing that the money they (Simon & Schuster) gave me as an advance for my book was a political donation and that iHeart putting me on the air was a political donation, and they knew both of those things were ridiculous because I wasn’t even a candidate.”

However, Voss said RPK’s complaint, particularly concerning Jones’ radio show, tapped into a broader, long-running public perception that broadcast media are supposed to give fair airtime to both sides in political conflicts.

Beth Rotman, director of money in politics and ethics at the Washington, D.C.-based watchdog group Common Cause, indicated the key problems exist on the enforcement side, including gridlock on the Federal Election Commission that can cause long delays in resolving complaints like the one against Jones.

She said Common Cause is advocating for proposed reforms in Congress to address these issues.

“In an ideal situation, you have an oversight agency that actually has enough resources to really look into these allegations and make a decision one way or the other,” she said. “But right now the umpire is not well.”

Jones said the FEC complaint didn’t affect his decision not to run for office, which was based on personal reasons and his calculation he couldn’t beat McConnell with former President Donald Trump on the ballot in 2020.

If anything, he said the Republican Party’s complaint made him more eager to run.

“It almost made me reconsider for a minute,” he said. “My slogan could have been: ‘He took my job. Now I’m going to take his.’”

However, he’s confident the call he made was the right one, saying: “I would’ve lost.”