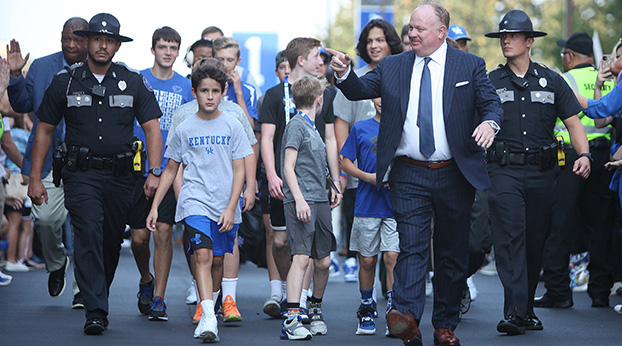 Kentucky head coach Mark Stoops greets fans at The Cat Walk, an event before a game between the LSU Tigers. - Photo by Jeff Moreland

LEXINGTON, Ky. (KT) — Mark Stoops liked his team’s approach during the lone bye week of the season last week and didn’t give Kentucky too much time to relax.

“It was important last week to not take the foot off the gas with the players,” Stoops said Monday. “I really appreciate the players — the way they handled the bye week last week. They understood there was going to be some time off, but the time on the field, whether it be in the meetings or on the practice field, we needed to continue to keep that (intensity).”

A break is always a concern, Stoops said, but he plans on returning to full speed this week as the Wildcats take on Mississippi State on Saturday in Starkville. Unlike the regular season, Stoops planned a full-scale workout Monday and “picked up the tempo.”

The week off, Stoops said, gave the Wildcats a chance to heal from the first six weeks of the season and prepare for the final five games.

“Hopefully we will be in a really strong position for the second part of the year,” Stoops said.

Stoops didn’t single out any one of his players but said his entire squad benefitted from the break.

In the last meeting between the two teams, the Wildcats dealt the Bulldogs a 24-2 setback at Kroger Field in a contest Kentucky dominated from start to finish, Stoops isn’t expecting things to be as easy against former Kentucky offensive coordinator Mike Leach, now in his second season in Starkville.

“It’s no surprise to anybody to see the improvement with Mike (in his second season at Mississippi State),” Stoops said. “That’s to be expected. We all know what kind of quality football coach he is, but you continue to see a very strong defense as well that presents a lot of problems and the same with special teams. (They are a) complete football team. We will have to have a great week of preparation as we get ready to go down there to Mississippi State.”

Kentucky is coming off a 30-13 loss to top-ranked Georgia in its previous contest on Oct. 16, the team’s first loss of the season. Although the Wildcats were idle last week, Kentucky moved up three spots in the Associated Press Top 25 poll this week and is ranked No. 12 in its third straight week in the poll.

• Stoops said he “feels like there is a chance” receiver Josh Ali will make a return to the lineup this week and added that defensive lineman Marquan McCall also could be back this week.

• Kentucky’s contest against Tennessee set for Nov. 6 will kick off at 7 p.m. on ESPN2.

• Stoops was asked about his favorite Halloween candy but didn’t produce an endorsement. “You can tell by me, I eat any candy,” he quipped.