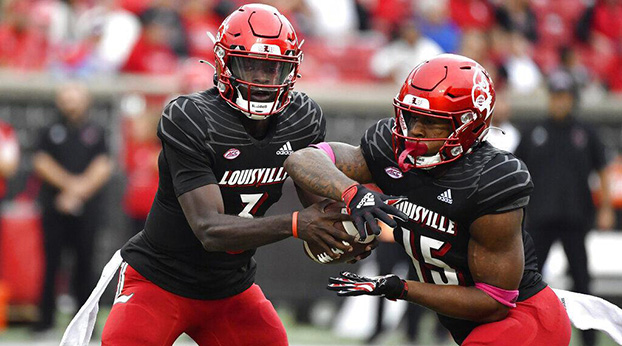 LOUISVILLE, Ky. (KT) — Louisville’s trio of versatile running backs and their dual threat quarterback are on a roll. Whether they can keep it up will go a long way toward determining how the rest of the season goes. And maintaining anything close to the current pace isn’t going to be an easy task given the quality defenses the Cardinals (4-3, 2-2 ACC) are going to face in their next two outings.

UofL’s running attack has produced an average of 261 yards per game in the last three outings, and as an indication of its depth, three different players have been the leading rusher in those games — Jalen Mitchell (89 yards vs. Wake Forest); Hassan Hall (162 vs. Virginia) and quarterback Malik Cunningham (133 vs. Boston College).

The Cards have scored eight touchdowns on the ground during that span. Although Cunningham continues to be the team’s leading rusher, his margin has shrunk lately. He has rushed for 480 yards, just 56 more than Mitchell. Hall has accounted for 237 yards and Cooley 213. The running backs have gained 574 yards in the last three outings and each of the three has had a 100-yard game.

However, Cunningham continues to be the guy UofL counts on in the red zone, having scored 13 touchdowns. Mitchell is second with three TDs.

Those performances have made earlier criticism of Louisville’s offensive line and coach Scott Satterfield’s play-calling a distant memory.

“We’ve got confidence in Jalen, Trevion and Hassan,” Satterfield said. “These guys have been making plays.”

Cooley made a prophet out of Satterfield, while also showing that any of UofL’s weapons in the backfield could have a big day.

“He’s a guy we feel like can break it and have a game like Hassan did,” Satterfield said. “He’s that kind of player and he catches the ball out of the backfield as well. He’s still growing, he’s still learning, experience and all that stuff.”

Sure enough, after gaining just seven yards against Virginia, Cooley bounced back with 112 against Boston College.

Of course, a major component of the Cards’ success on the ground is its improving offensive line.

“Let’s face it,” UofL offensive line coach Jack Bicknell Jr. said during a media teleconference Tuesday evening after practice. “We had a couple heartbreaking losses there and you have a choice: either you go backwards and feel sorry for yourself, or you get mad. I think our guys kind of got mad and have a chip on their shoulder.”

Offensive guard Caleb Chandler, the ACC Offensive Player of the Week, agreed with that assessment.

“That is a great way to describe it,” he said. “We know we can’t throw in the towel because there’s so much to play for in the ACC. It’s so wide open and we’ve got to keep going like this. I feel like (BC) was just the start of it, that we haven’t hit our stride yet.”

“They’re just a very solid defense and they’re not afraid to bring pressure,” Satterfield said of the Wolfpack. “They’ll bring the house and put the pressure back on the offense. It’s a swarming defense.”

Working in Louisville’s favor, though, is a slew of injuries that have hit NC State on the defensive side of the ball. The Wolfpack has lost four starters — two standout linebackers, a safety and a tackle.

“I know they’ve had some injuries, which obviously hurts them,” Satterfield said. “They’ve had to start playing some guys that maybe hadn’t played as much. But I think the scheme of their defense gives them an opportunity.”

Week of rest comes at good time for Kentucky…