Pandemic map is mainly orange, but has plenty of red counties 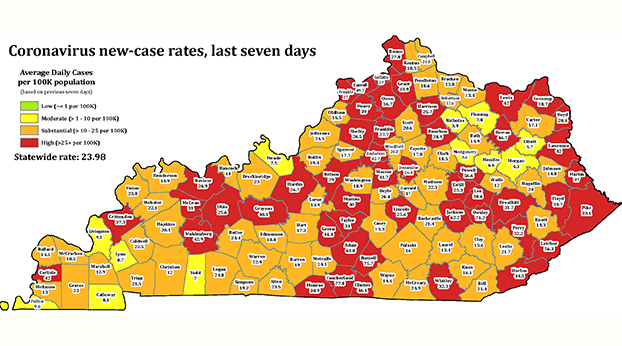 Kentucky’s coronavirus map is now mainly orange, indicating the continued decline in new cases in the last five weeks, but the state’s new-case rate is still above the national average, and it has many hot spots.

The state reported 1,493 new cases Tuesday, lowering the seven-day rolling average by 42, to 1,348; and the percentage of Kentuckians testing positive in the last seven days fell for the 10th straight day, to 5.66%.

Over the last 14 days, the new-case rates in Grant, Anderson and Rowan counties are among the highest in the nation, according to The New York Times’ analysis of Centers for Disease Control and Prevention data. Grant’s 14-day rate is 62nd in the nation, Anderson’s is 91st and Rowan’s is 97th. Rates reported by the state differ due to methodology, including removal of duplicate test results.

The Times says Kentucky’s statewide rate is 19th among the states and has declined 36% in the last 14 days, the fifth greatest drop among the states; Tennessee’s drop ranks first, at 59%.

Eight of the state’s 10 hospital regions reported more than 80% of their intensive-care-unit beds in use, but none were above 94%. That was the rate in Northern Kentucky, where all ICU beds have been occupied recently.

The state reported 25 more Covid-19 deaths, raising the pandemic’s toll to 9,665. Kentucky is averaging just over 34 deaths per day over the last seven to 14 days.

In other pandemic news:
• Without dissent, a Food and Drug Administration advisory committee recommended authorizing Pfizer vaccines for children 5 to 11.

“The vaccine would be administered in two small doses, a third of the amount given to teens and adults, given three weeks apart,” Katie Camero reports for McClatchy Newspapers. “Officials found the smaller dose offered adequate protection and led to less intense side effects.” The next steps are approval by the FDA, which usually follows the committee’s advice; a recommendation from a CDC advisory panel; and final approval by the CDC director. Children could get shots as early as Wednesday, Nov. 3.

• Masks are now optional in Trimble County Schools, following the school board’s 4-1 adoption last week of a new tiering system that makes them mandatory only if the system has 25 active cases, or 2.25% of its student population, Olivia Gennaro reports for The Trimble Banner. The principal of the county’s high school told the board that enforcement of masking “takes up a lot of time, often focused on the same students,” Gennaro writes.

• More than 130,000 Americans probably died because the Trump administration was “distracted” by last year’s election and ignored experts’ recommendations to fight the pandemic, former coronavirus response coordinator Deborah Birx told congressional investigators this month, The Washington Post reports. “I believe if we had fully implemented the mask mandates, the reduction in indoor dining, the getting friends and family to understand the risk of gathering in private homes, and we had increased testing, that we probably could have decreased fatalities into the 30-percent less, to 40-percent less range,” Birx said. When Trump left office, more than 435,000 people had died. Now the total is over 735,000. “Birx said she analyzed data from states with more robust mitigation measures, concluding there was between a 10 to 15 percent increase in fatalities without a mask mandate,” the Post reports.

What is the cost to install an electric car…