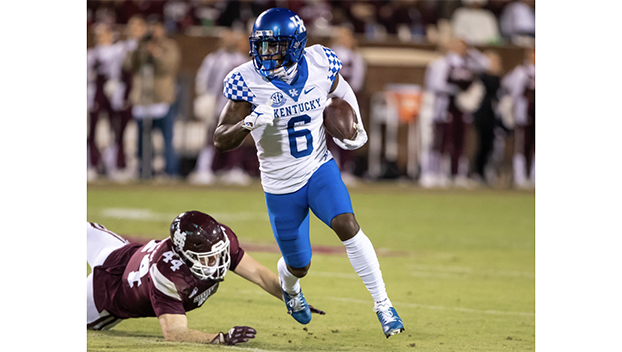 It was another haunting loss for Kentucky in Starkville on Halloween weekend.

Kentucky had two weeks to prepare for Mississippi State, but the Wildcats still weren’t fully prepared for the Bulldogs and the end result was a second straight setback.

In its first game since losing to top-ranked Georgia on Oct. 16, Kentucky suffered a disappointing 31-17 loss to Mississippi State Saturday night in Starkville. The Wildcats (6-2, 4-2 Southeastern Conference) can clinch at least a tie for second-place in the SEC East with a win over Tennessee next Saturday at Kroger Field.

Playing just its third road game of the season, Kentucky committed four turnovers, including three interceptions by quarterback Will Levis. It wasn’t the outcome coach Mark Stoops expected from his 12th-ranked Wildcats. He said the miscues gave his team “no shot” playing in the road.

“It’s been a while since we’ve played a game like that,” Stoops said afterward. “(It’s) not a very good feeling. They beat us in all phases and physically they played extremely hard. We didn’t match the intensity and we got pushed around. We were unable to run the ball, they ran the ball, made competitive plays and outreached us, outplayed us in every area and so, overall, a very deflating defeat.”

The Bulldogs scored 31 unanswered points after the Wildcats scored the first 10 points of the contest, ignited by Josh Ali’s 74-yard punt return for a touchdown in the first quarter. A 41-yard field goal by Matt Ruffalo gave the Wildcats a 10-0 lead, but Kentucky didn’t score again until Levis threw a 17-yard touchdown strike to DeMarcus Harris early in the fourth quarter.

Kentucky had difficulty stopping coach Mike Leach’s “Air Raid” offense and failed to get its first win in Starkville since escaping with a 14-13 victory in 2008. Kentucky used six interceptions to defeat Mississippi State 24-2 last year in Lexington, but quarterback Will Rogers, was nearly flawless against the Wildcats this time around.

Rogers completed 36-of-39 passes for 344 yards and one touchdown as the Bulldogs (5-3, 3-2) racked up 438 yards in notching their third victory in the past four games. Mississippi State also rushed for 94 yards and scored three rushing touchdowns, including two by Dillon Johnson and another by Jo’Quavios Marks, who led the Bulldogs with 58 yards rushing.

“It didn’t seem like we made one competitive play (on defense),” Stoops said. “Anytime they throw as efficiently as they did … they ran it just enough to keep us off-balance and they moved the chains.”

“It hurt,” Kentucky linebacker Marquez Jones said of the loss. “You’ve got to give it to Mississippi State. They were more physical, had the most energy and we didn’t respond.”

Levis threw for just 150 yards and the Wildcats were held to just 216 total yards. Leading rusher Chris Rodriguez was held to 34 yards and Kentucky had only 66 yards rushing.

“I thought it was huge,” Leach said of the turnovers. “Kentucky is really about control … maintaining control is something we’ve struggled with this year, so those obviously helped.”

Stoops said the Bulldogs made it difficult for Levis to get into a routine.

“They did a nice job of mixing some things up,” Stoops said. “I think he got back to pressing and rushing into some things, forcing the issue, especially early in the game. It’s not just him, we didn’t play very good anywhere.

… Overall it was not good — across the board.”

Week of rest comes at good time for Kentucky…