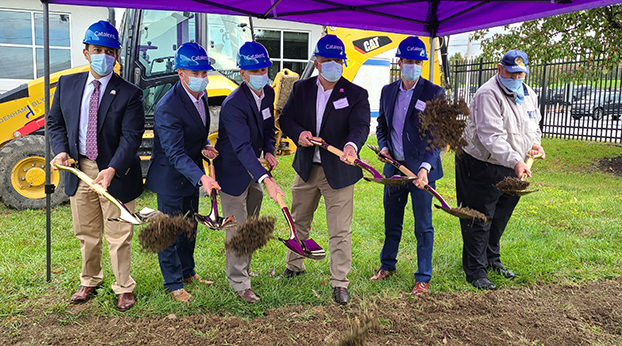 The company broke ground on an office expansion with a ceremony attended by management and local government officials.

“It’s about 15,000 square feet, two floors, and we are looking at adding about 100 seats; a mix of open office space and closed office space,” Director of Engineering Trevor Gray said. “It has an increased training facility as well as a fairly large and up-to-date customer experience area.”

The expansion will be the fourth overall at the facility and the first dedicated to office space since it opened in 1992, and is much needed, according to Gray.

“In the past, we’ve just shoved folks wherever we could put them in the facility,” he said.

The company has also put the employees outside the facility. It has seven modular office spaces scattered around the 32 acres it owns on Enterprise Drive.

The need for office space is so great that the expansion will hold a novel distinction.

“It is really the first time we have made a significant investment in the site that didn’t generate revenue,” Gray explained.

Catalent currently employs over 600 people, and Gray said the expansion will give it a “significant” advantage as an employer.

“Given the competition in the job market right now, the unemployment rate being as low as it has been for a while, it is really going to give folks a nice space to be able to come to,” Gray said.

The expansion also comes at a time of growth for Catalent.

“Just in the past 15 months, this site has added 120 jobs,” General Manager Chris Rosenbaum said. “We’ve also committed $50 million in capital with much more to come.”

State Senator Ralph Alvardo said he was glad the company is committed to growth, given how many businesses are currently short-staffed.

“Right now, the hardest issue we have is workforce shortages. When we hear about workforce expansion, it is exciting for us to hear that … Here in Clark County, we are ready for that expansion and that growth.”

The expansion project is estimated to be completed in late 2022.