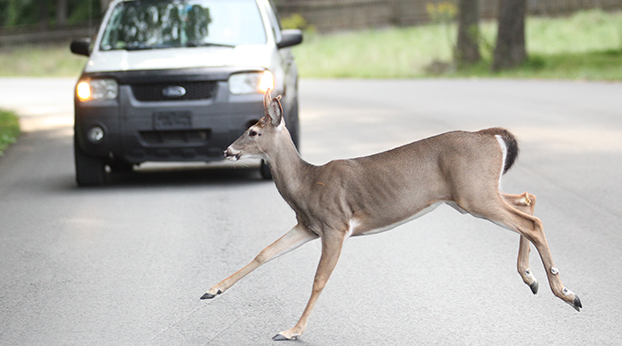 Deer collissions in Kentucky cost an average of $4,500 per incident according to AAA. - Photo by Jeff Moreland

LEXINGTON, Ky. — AAA is reminding drivers that this is the time of year when they are most likely to strike a deer, which can be both dangerous and now, more expensive.

Now through December is deer-mating season, so the animals are more active and, therefore, more likely to dart into the roadway, increasing the risk of a potentially deadly collision.

While the vast majority of deer strikes do not involve serious injury, according to the Insurance Institute for Highway Safety (IIHS), almost 2000 people were killed in crashes involving animals from 2010-2019, including 39 here in Kentucky. The Commonwealth ranks 21 out of 50 states in number of fatalities due to deer strikes during that 10-year period.

With that in mind, AAA is warning drivers to limit distractions and look out for the animals, especially during the morning and evening hours when distracted deer are most active and most likely to intersect with commuters.

“Safety is priority one, so first and foremost we are encouraging motorists to adjust their driving behaviors to prevent a collision,” says Angela Hoskins, territory insurance manager, retail sales, KY/WV/VA, AAA Club Alliance. “But they may also want to adjust their insurance coverage because a minor deer strike may mean a major expense.”

New Vehicle Technology Driving Up Cost of Repairs
AAA Insurance statistics indicate that across Kentucky, the average claim for deer strikes in 2020 was more than $4,500.

At least partially to blame is new vehicle technology, cameras and sensors that may be in the windshield, bumper or rear view mirrors, driving up the cost of repairs. In fact, previous AAA research indicates that even minor incidents that cause damage to this technology can add up to $3,000 in extra repair costs.

“Deer can be unpredictable so even the best drivers are at risk. Deer collisions can put a serious dent in your wallet if you don’t have a comprehensive insurance policy with adequate coverage,” Hoskins adds.

AAA Tips to Avoid an Animal Collision
“There are a number of precautions motorists can take to help lessen the chance of a deer strike,” said Lori Weaver Hawkins, public and government affairs manager, AAA Blue Grass. “The tragic loss of life and the injuries that these collisions cause make their prevention critical. While not all deer strikes can be avoided, motorists should be aware of the ways they might be able to safely avoid a collision or lessen the impact, particularly this time of year with deer more active.”

Here are some tips from AAA to avoid a collision involving an animal:
• Keep your eyes moving back and forth. Continuously sweep your eyes across the road for signs of animals. While the most likely accident is caused by an animal darting in front of you, one might also run into the side of your car.

• Be especially attentive in early morning and evening. Many animals, especially deer, are most active during prime commuting hours – roughly 5 a.m. to 8 a.m. and 5 p.m. to 8 p.m.

• At night, use high beams when there’s no oncoming traffic. Your brights can help you spot animals sooner. The light reflecting off their eyes may also reveal their location.

• Slow down and watch for other deer to appear. Deer rarely travel alone, so if you see one, there are likely to be one or more nearby.

• Honk your horn with one long blast. A long blast on your horn may frighten large animals, such as deer, away from your vehicle. The Insurance Information Institute (I.I.I.) advises against relying on devices such as deer whistles and reflectors, which have not been proven to reduce collisions with animals.

• Use brakes if impact is imminent. If an animal is in your path, stay in your lane. Swerving away from animals can confuse them so they don’t know which way to run. It can also put you in the path of oncoming vehicles or cause you to crash into objects on the side of the road.

• Always wear a seatbelt. According to the Insurance Information Institute, the chances of getting injured when hitting an animal are much higher if you don’t have your seatbelt on.

In the event of a collision with an animal, AAA Insurance recommends:
• If possible, immediately move the vehicle to a safe location, out of the roadway. Your safety and the safety of your passengers is most important.

• Once you are in a safe location and no longer driving, call the police.

• Put the vehicle’s hazard lights on, whether it is light or dark outside.

• Avoid making contact with the deer/animal. A frightened or wounded animal can hurt you or further injure itself.

• Contact your insurance company as quickly as possible to report any damage to your car.