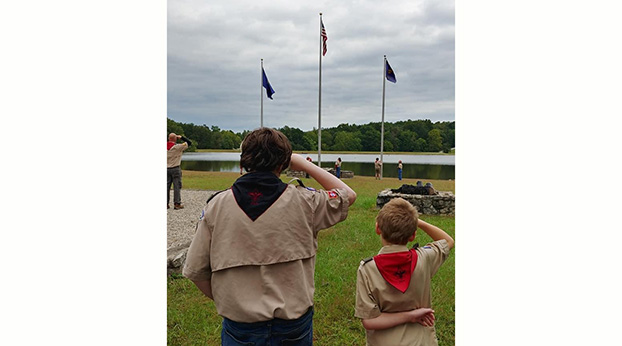 Boy Scout Troop 56 will celebrate its 50th anniversary on Saturday with a chili dinner. - Photo submitted by Misty Gay

Boy Scout Troop 56 will celebrate a golden anniversary this Saturday.

The troop’s 50th-anniversary celebration will occur from 5:30 to 8 p.m. at the Taylor Center, which is located at the back of Emmanuel Episcopal Church’s property in Winchester.

All former troop members are encouraged to attend.

“We are having an alumni celebration and inviting all our alumni scout families out for a chili dinner,” said the troop’s committee chair, Misty Gay.

The cost to attend is $5 per person and $15 per family. Guests will also be able to bid on items in a silent auction.

All proceeds from the event will benefit the troop.

“We will be utilizing this event as a fundraiser to help us repair or replace equipment that hasn’t been replaced for 20 years,” Gay said.

Several current scouts and alumni will speak about how scouting has impacted their lives.

Mayor Ed Burtner will provide an overview of how scouting has impacted Clark County over the past 50 years.

Troop 56 was founded in 1971 and has the distinction of being served by several long-tenured scoutmasters.

“They have had four scoutmasters,” Gay said. “Mr. Clay Rose was actually the scoutmaster there for over 36 years. He has given quite the service to the scouting community in Clark County.”

Rose will receive the troop’s retired flag at the event to commemorate his years of service.

Since its inception, Emmanuel Episcopal has been the troop’s home and provides a meeting space for its Cub Scout Pack and Troop 562, the girl’s unit.

“We’ve enjoyed a fantastic relationship being a youth ministry of the church,” Gay said.

Troop 562 is one of the troop’s attempts to modernize the scouting experience. They often participate in activities with their brother troop.

“It has been very good for our youth, and they have been working wonderfully together,” Gay said.

The skills that scouting helps develop have survived the test of time.

“It not only provides life skills like being able to do wilderness survival, tying knots, or hiking and camping, which is what most people think about scouting. But scouting actually teaches a lot about citizenship, not only in the community they serve but in the nation as well,” Gay said.

Local “beast” on the hunt for glory