Local “beast” on the hunt for glory 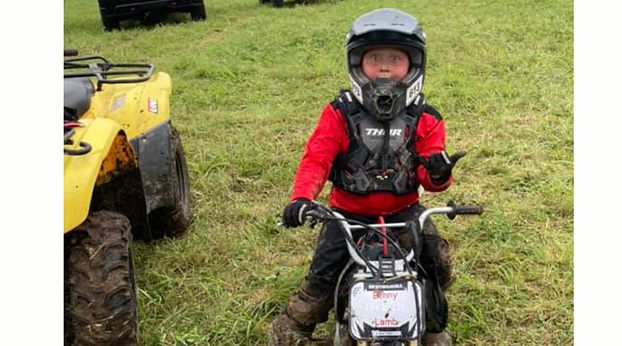 Nicknamed "The Beast", Bentley Lamb is on the verge of becoming a two-state cross-country dirtbrike champion in his first season competing. - Photo courtesy of Bentley "The Beast" Lamb Facebook group..

“The Beast” is on the hunt for more championship glory.

He is better known as Bentley Lamb, an 8-year-old Winchester resident.

Lamb is in his first season competing on the cross-country dirt bike racing circuit in Kentucky and Indiana.

“He goes out in the middle of the woods, and they race through the woods and on an open track,” said his mother, Elizabeth Lamb.

Lamb races in the 50 CC junior division, which has five rows of racers. He rides in row four.

Lamb captured the Kentucky championship in his division on Oct. 23. His closest rival finished 15 points behind him.

He is ranked number two heading into his final race of the season and is only three points behind the overall leader.

Across over 20 races in both states, he has never finished below fifth place.

“It’s fun,” Lamb said about his love for racing. “It’s fun racing with all my friends.”

His favorite races were at the track in Stanford, Kentucky.

“They are pretty fast,” Lamb said. He also enjoyed the motocross section of the course that has jumps.

Bentley said he is surprised by his success in his inaugural season.

“I’ve never got this high at something,” he said.

Elizabeth Lamb said that Bentley’s dad competes as well, but that her son had not spent much time on a bike before the season.

“Before his first race, he had only had maybe six hours on the bike in total,” she said.

Elizabeth said she is “amazed” at Bentley’s success and that he has developed quite a following across two states.

“Every time they tell me how fast he is and how much talent he has. They’ve never seen a kid that young take off so quick,” she said.

Many of his admirers are impressed by his navigation abilities on the more challenging portions of the course.

Elizabeth Lamb said Bentley rarely slows down when obstacles are in the way.

Bentley said “he doesn’t care” which trails he picks, he goes with his instincts.

Before his championship win in Kentucky, he told the Sun it “would be amazing” to capture a title in his first season of competition.

Now he is on the hunt for another; a beast who won’t be denied.