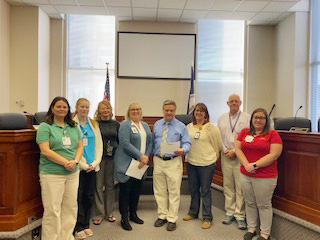 November is National Hospice and Palliative Care Month and gives a chance for communities to recognize the hard work of individuals who have dedicated themselves to the field.

It was officially recognized as such in Clark County thanks to a proclamation signed and issued by Judge-Executive Henry Branham on Monday.

Winchester-based Hospice East has provided Clark and Powell counties with service since 1981.

“A lot of people think that you have to go to a hospital to die,” said Pinkerton. “In reality, you don’t have to. You can be comfortable. You can spend your last days doing what you want being around who you want.”

A fundamental tenet of hospice care ensures that people are surrounded by as much love at death as they were at birth, which is essential in the age of COVID-19.

“If you go to the hospital, you can’t have more than a visitor or two. That’s not the case with us,” Pinkerton said.

So what is the difference between hospice and palliative care?

“With the hospice side, it is to take care of people who are given a prognosis of six months or less to live,” Pinkerton explained. “We serve people in the hospital, in the home and the nursing home. We try to meet them where they are at.”

Palliative care is specialized assistance for the very sick.

“We take care of people with chronic illnesses. They don’t have to have a prognosis. They have got to be homebound, pretty sick and unable to get up to the doctor, “ Pinkerton said.

Many of the medical personnel, social workers volunteers at Hospice East decided to get involved after experiencing what hospice are did for a dying loved one. Pinkerton did after she saw it firsthand before her grandmother passed away.

“Just watching them come in and take care of her made me want to work here,” she said.

For more information about Hospice East, visit its website at www.hospiceeast.com.