Stoops expects Wildcats to rebound in showdown against Vols 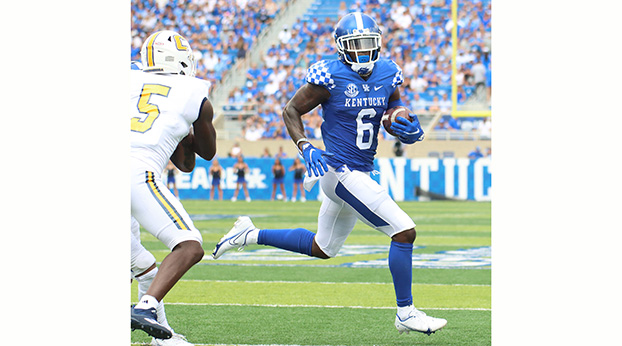 Kentucky wide receiver Josh Ali (6) runs the ball after catching a pass from quarterback Will Levis. - Photo by Jeff Moreland

Mark Stoops doesn’t think it will take much to get his team motivated for Saturday night’s contest against rival Tennessee.

“We’ll be jacked up and ready to go, trust me,” the Kentucky coach said. “That’s not going to be an issue.”

The Wildcats (6-2, 4-2 Southeastern Conference) carry a two-game long streak into the game. Kentucky opened the season with six consecutive victories, but have dropped two straight games, including a disappointing 31-17 decision at Mississippi State last Saturday.

Stoops was disappointed in his team’s showing coming off an open date but said the Bulldogs had everything to do with his team’s poor performance.

“They executed, they played harder than us, they played more physical. We weren’t as good as we could be and that’s up to us.”

Although the Wildcats have been struggling, Tennessee coach Josh Heupel expects a challenge.

“They play extremely well at home,” the Tennessee coach said. “Huge test for us to go on the road, night ballgame. Should be a great environment, one that our kids are looking forward to.”

Tennessee also has lost two straight, including a 52-24 loss to No. 3 Alabama two weeks ago. The Volunteers (4-4, 2-3) had an open date last week, giving them a chance to rest up for the remainder of the season. Kentucky defeated the Volunteers 34-7 a year ago in Knoxville but Stoops is expecting a different mentality this time around.

“They’re playing at an extremely high tempo offensively,” he said. “They have some difference-makers at wide receiver and obviously the stress they put on you with the tempo, in the spacing and things of that nature, and playing extremely hard defensively. (They are) overall, a much-improved team, so we are going to have to play a lot better than we did this past Saturday.”

“We can’t let people do that to you, that’s for sure,” he said. “(It is) not a good feeling, very frustrated, but we have to get things corrected, get back to work and, again, it boils down to making competitive plays. They are going to make some, we need to make ours.”

Stoops added Tennessee’s offense will be similar to Mississippi State, but with a different twist.

“It is different the way they will attack you, but similar in that they put pressure on you in the run game. Tennessee puts pressure on you, still,” he said. “They have extremely wide splits, but they’re going to run the ball and be more committed to running the ball and run it more effectively. “