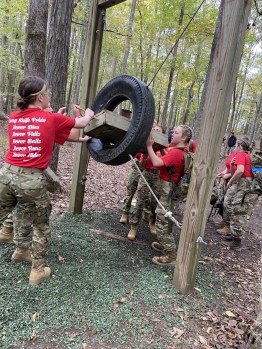 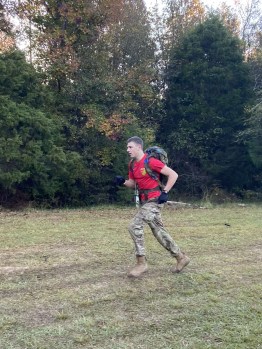 One of the team events was a 5K run. - Photo submitted by GRC JROTC. 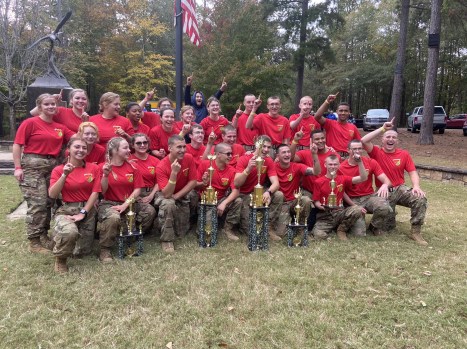 The George Rogers Clark High School JROTC went down to Georgia this weekend and came home as national champions.

The men’s commander, Logan Dawson, was surprised when he heard his team’s name called  but said it was excellent to see their labor yield success.

“Being the commander it was definitely rewarding seeing how proud the team was but it also brings a tear seeing four years of hard work pay off,” Dawson said.

Ethan Muncie said that the competition “went so fast that it was a blur.” He thanked God for “blessing our team with this amazing victory.”

Jonathan Curry, a senior cadet, is one of two students who have been to Georgia every year since the corp started going.

“I have been fighting since my freshman year to win that trophy,” he said. “It’s a bitter sweet moment knowing that this is my last year of high school and seeing it all go by, but it was an amazing way for raider season to end.”

Corp member Cameron Neely said that “it was very humbling” to be part of a national championship team and that “every adversity was was tackled with heart and courage.”

Two cadets, Monica Crews and Dawson, competed in the Ultimate Rader event on Sunday. The competition is a cross-country running event where participants must wear a weighted rucksack.

The teams are nicknamed the Long Knives and Lady Long Knives, a name given to the school’s namesake by Native American tribes during the Revolutionary War.