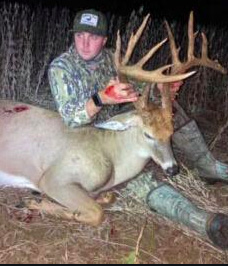 Neal Kirkpatrick poses with his 23-point buck in Daviess County.

Most hunters spend season after season searching for their once-in-a-lifetime deer.

Daviess County 25-year-old Neal Kirkpatrick’s big break came earlier this fall when a 23-point monster of a buck strolled below his deer stand during a “casual hunt.”

Kirkpatrick and his friend, Kyle Moore, both local school teachers, were hunting a farm in Daviess County when they set their sights on the buck. Kirkpatrick pulled out his Bowtech bow at approximately 7:15 p.m. and took down the non-typical giant with an unofficial gross score of 211.

The deer must enter the drying stage before the Kentucky Department of Fish and Wildlife can post the official score. In recent years, the entire state harvests an average of five deer that measure more than 211 inches. Records indicate that most of those came from outside of Daviess County and with a modern gun, rarely a bow.

“This was the first year I had access to the farm … I had several deer on camera and a few pictures of what appeared to be small bucks,” Kirkpatrick said. “I saw one 6-point buck roughly 15 yards behind me in my food plot; then I remember my buddy Kyle saying, ‘don’t move, look below you.’”

There was a 50-acre soybean field to his front and right and a “cleared out” section of woods behind him. A branch to his left obstructed his view, which Kirkpatrick said is likely the route the deer took.

“When I reached for my bow, the deer jolted about 35-40 yards into the beanfield and stopped on a dime. I was able to get a perfect shot within seconds,” he said. “I don’t believe I will ever harvest another one this size. I just happened to be in the right place at the right time.”

Kirkpatrick had just finished mowing his yard, felt a cold front coming in, and decided to embark on a casual hunt with minimal expectations. He invited Moore over less than an hour before dark, and the two were about to call it quits before the moment transpired.

“I called Kyle and said, ‘I’ve got close to an hour and a half before dark. I haven’t witnessed one sign of a deer; why don’t you come out and hunt with me?’ He rushed over in knee-high boots, basketball shorts, and a camo hoodie,” Kirkpatrick said. “As soon as I made the shot, we heard a thud, and the deer took off east to the beans. I stood up and watched him run about 150 yards into the beans.”

Kirkpatrick said he remembers Moore saying the deer fell right before the ditch. He described the shot as a “little too far for comfort” but thought he struck deer directly under the spine.

Kirkpatrick said the hunt carried extra emotions because his girlfriend’s uncle hunted the land for years before passing away a few years ago. He added that his aunt — a “big supporter” of his — passed away 10 years ago to the day and that he was meant to be in that stand on that particular day.

Kirkpatrick called upon his friends Chase Geary, Nick Huff, and Jake Peveler to assist him in tracking the deer. He said they walked for nearly 15 minutes before finding the first trace of blood on the top of a beanstalk.

“I remember calling my friends and telling them I had just shot the biggest deer of my life,” he said. “We tracked the deer to exactly where Kyle saw it fall. They all said, ‘When you said the biggest deer of your life, we weren’t expecting a buck like this.’”

Kirkpatrick embraced hunting at a young age, under the guidance of his grandfather Don Jones who “taught him a lot.” He said he had ventured away from deer hunting because of his growing passion for waterfowl but always reserves time each year for harvesting a buck.

“Harvesting a large buck has become a yearly tradition for me. There’s nothing like harvesting a buck with a bow; I rarely, if any, hunt with a firearm anymore,” he said. “I just happened to be in the right place at the right time, and I was blessed to get the opportunity to hunt that evening.”