Veterans Day ceremonies give thanks by honoring service, sacrifice 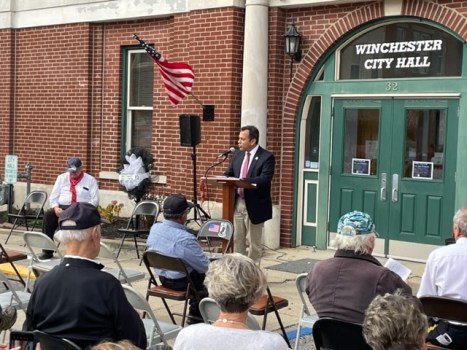 State Sen. Ralph Alvarado (R-28th) spoke about the importance of saying "thanks" at a Veterans Day service Thursday in front of Winchester City Hall. - Photo by Miles Layton 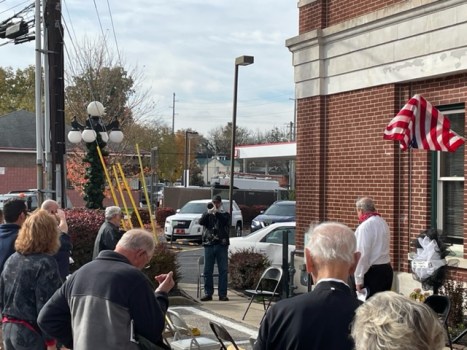 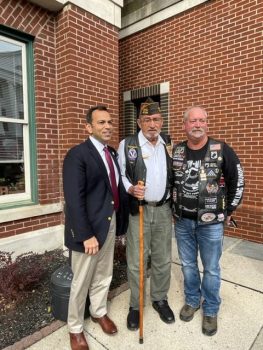 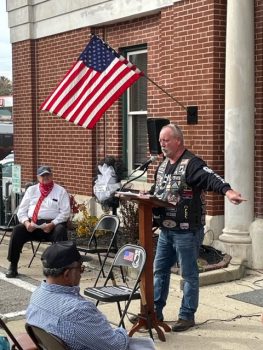 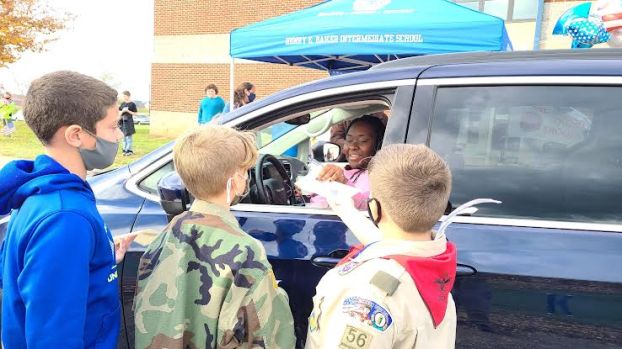 Local veterans were treated to biscuits, coffee and letters of gratitude by Baker Intermediate students and staff. - Photo by Warren Taylor 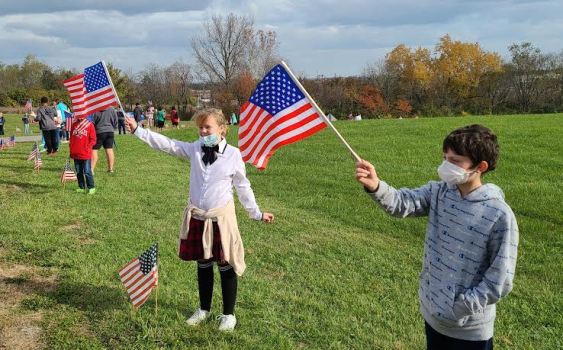 Baker students welcome the veterans as they drove up to the school with cheers and waving American flags. - Photo by Warren Taylor

Veterans Day paid tribute to those who served Clark County and the nation.

Thursday, veterans were honored at ceremonies in front of Winchester City Hall and at Henry Baker Intermediate School.

After a large crowd gathered for the ceremony in front of city hall, the service opened with a prayer by U.S. Army Veteran Roy Hudson, who served between 1966 and 1971, followed by the Pledge of Allegiance led by Mayor Ed Burtner, who served in the U.S. Marine Corp between 1969 and 1971.

Perri Wilson sang the National Anthem to set the stage for remarks from state Sen. Ralph Alvarado (R-28th) who spoke about the importance of gratitude and saying thanks.

As the medical director of Honor Flight Kentucky, Alvarado says he’s had the chance to accompany many veterans to the nation’s capital.

“While at one of those trips,” he said, “I’ve visited the Vietnam Memorial and the National World War II Memorial. Walking along the Vietnam Memorial, I passed a mother sobbing while her young daughter clinched in her hand, a father scratching a pencil across paper to capture his son’s name from the wall, a vet in a wheelchair who was handing a tissue to a tearful older man, an older couple desperately searching for the name they wished was not on the wall.”

Alvarado said as he became overwhelmed by the sight of countless teddy bears, crosses, flags, and candles covering the ground by the memorial, he heard sounds that will echo an eternity in his soul.

“I turned away and looked across the reflecting pool, but the sounds continued: the soft crying, sniffling, a deep breath, a child’s voice, a tissue being pulled from a box, gravel crunching as people moved around in search, and then, ‘Here it is. Here he is. He’s here. It’s here. I found it.’”

“I could feel my heart ache, my throat swell while my head filled with two simple words — eight letters — and they seemed inadequate. But I had nothing else. And so I repeated those words silently.

“And as I started to walk away, I quietly whispered them. I had to let them out — I had to pass them to the air, to swirl around the mothers, fathers, brothers, sisters, friends, sons and daughters who were standing at the wall grieving alone. I have never meant those two words more than I did that day, at that time, in that place.”
Recalling that poignant moment, Alvarado said, “The emotion is met with action. Gratitude collides with thankfulness and we move into a place of thanks — giving.”

Alvarado’s words were capped off by a speech from Larry Hall of Rolling Thunder, Chapter 5. Hall began by offering a word of thanks and to shake the hand of every veteran before saying efforts are underway to bring home those veterans abroad who gave the ultimate sacrifice.

The service concluded with a bugle sounding “Taps” and a closing prayer from William Newell, U.S. Navy veteran between 1983 and 1991.
Biscuits and Brew

Henry Baker Intermediate School has hosted up to 1,500 people in the past for its Veterans Day festivities, but COIVD concerns drove the celebration outside this year.

“This morning, we are having our Biscuits and Brew Veterans Day Salute,” said Principal Josh Mounts.

Not only were local veterans treated to a drive-thru cup of hot coffee and a sausage biscuit, but they also pulled up to cheering students waving American flags and received letters expressing gratitude for their service.

“We just want to make them feel special, Mounts said about the celebration. “It’s a special day for special people.”
The celebration hit home for Rachel Click, a 5th-grade reading teacher. Her husband, Cody, is a veteran and served with the 82nd Airborne Division as a paratrooper.

“He served for four years and went to Afghanistan and helped with earthquake relief in Haiti,” Click said. “He loved serving his country. He really liked being Army, and it still means a lot to him today.”

The Baker students were ecstatic to celebrate those who have served and who are still serving.

“They are very excited,” Click said. “Every year, they learn a little bit more about Veterans Day and what it means.”
Mounts said that Baker’s Student Technology Leadership Program members produced a virtual celebration that students watched before heading outside.

He said that he felt the program helped put the day into perspective for Baker students.

“I think it’s important that our kids see what true heroes look like; that they know what a veteran is and what they’ve done.” Mounts said about the student’s participation in the celebration. “It’s very easy to take things for granted. We have so many rights, but we also have responsibilities, and one of those responsibilities is to honor those who came before us.”