100 years! Ann Miller reflects on health, changes in society and her life 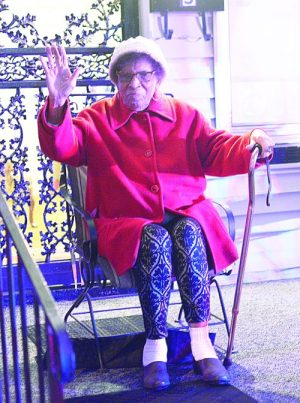 Though Winchester resident Ann Miller celebrated her 100th birthday on Nov. 6, she does not think that there is a set way to reach the century mark.

“There’s not a secret, really. Everybody is different,” said Miller.

The key might lie in everyday living and being vigilant about one’s health.

“We have to check on ourselves,” Miller said.

“I never did smoke,” Miller said. “I like blackberry wine and strawberry wine every now and then.”

Or the key might be eating well and staying active.

“Get up and move,” Miller advised. “Plan something every day to get out of the house. If you have to go to work, then go to work.”

Perhaps the most important thing, especially to someone who has worshiped at Broadway Baptist Church for over 80 years as Miller has, is remembering and praising God.

“As soon as I open my eyes, when I wake up every morning, I look up, and I say ‘Thank you, Lord, for bringing me through the night,’” Miller said. “I like to lift the Lord up because he’s all we’ve got.”

Miller was born in Winchester in 1921 to James “Jimmy” and Maggie Taylor. She was the third of five children and had four brothers: Dan, Douglas, James, and Russell.

Miller said she remembers her father as a skilled hunter and taxidermist.

“He would kill the animals and skin them,” she said. “He had great big long brushes. He would brush them, turn them wrong side out, hang them up on boards–he made boards–and then would dry them.”

Taylor sold the skins at the Winchester Train Station.

“That helped feed us and bought us school clothes and things,” Miller said.

Growing up in a family of hard workers shaped who Miller would become.

A graduate of Oliver High School in 1940, Miller married her husband, the late Thomas Miller, in 1942.

Thomas was one of the famed Tuskegee Airmen, and the couple spent the early part of their marriage at military installations in Alabama and Michigan.

The pair corresponded by letter during the two years that Thomas was in Italy during World War II. They returned to Winchester after he was discharged from service.

The economic climate was not what they anticipated.

“We couldn’t make any money here in Winchester; there wasn’t too much going on,” Miller said.

So they decided to make sure something would go on for them by opening Winchester’s first Black-owned taxi service, Miller’s Taxi.

Miller drove a cab for a month but was not keen on the experience.

“So I told my husband that I would just stay in and keep the books,” she said. Part of her duties was pumping gas for customers that stopped in for a fill-up at their pump.

After several years, the Millers sold the business to a friend and were soon approached with another entrepreneurial opportunity.

The owner of Maple Street Liquor Store was getting older and offered to sell his business to the Millers.

Because of her religious background, Miller was initially skeptical about purchasing the business, but after a conversation with the owner, she decided to go along with the sale.

The Millers operated the liquor store from the 1960s onward. They retired from the business when Thomas was 90 and Ann was 88.

Miller has seen numerous positive and negative changes in the world over the last 100 years and said she believes that racial matters have improved for the most part.

“Things have changed how we treat each other, color-wise,” Miller said.

When she and Thomas wanted to buy their first home, they had trouble getting a loan from financial institutions on Main Street due to the color of their skin. Thankfully, a private loan from a friend helped the couple purchase the house they shared for decades. Miller still lives there.

When Miller briefly lived in Alabama in the 1940s, she was advised not to explore certain sections of her community.

“They told me, ‘If you see somebody coming down the street, you have to step off the sidewalk’ … I had never heard that,” she said.

Determined to see it for herself, Miller boarded a city bus and went downtown. She walked on the sidewalk and passed a woman who said nothing to her. With her curiosity satisfied, Miller said she had no desire to do it again.

Decades later, Miller attended a play at the Leeds Center for the Arts and finally got to sit downstairs after being prohibited from doing so when she was younger.

“We sat downstairs, and I said, ‘Well now.’ But you know what, I thought that I’d rather be upstairs because you can see better,” Miller said.

And while she was legally required to step off a sidewalk in Alabama as a young woman, she could visit downtown Winchester without incident as old prejudices faded away.

“I could tell when I went shopping in town, I could go into Bloomfields, and all the clerks were real nice,” Miller said.